Recycling in the early 20th century

Did householders really 'carry' their dustbins out for collection?

My mother's childhood recollections of waste disposal and refuse collection mention that people 'carried' their dustbins out to the pavement for the dustman to collect. 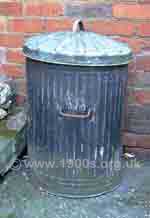 This struck me as strange because dustbins are usually rather heavy: During the 1940s and 1950s when I was growing up, dustmen came into side alleys and back gardens to collect dustbins, and householders did not have to carry them out. Even today, when householders do have to take their bins out to pavements for collection, the bins are wheelie bins which have wheels.

Why were dustbins light enough for householders to carry out for collection?

I realised that society in the early years of the 20th Century actually had very little to dispose of, and was in fact highly commendable in terms of its recycling. Here is why:

Did ashes from the coal fires make dustbins heavy or were they 'recycled'?

To answer the question of whether ashes were put into dustbins, ompare the following ways of dealing with ashes, firstly in the 1940s and then later in the century.

Disposal of ashes in the 1940s

In my family in the 1940s the coal ash and wood ash never went into the dustbin. We saved it and spread it on the garden. This was thought to improve the heavy London clay while also keeping the slugs at bay. We also took sacks of ash to our allotment to be dug into the soil, and this was common practice. Even soot from the chimney was saved for a year so that it lost its sulphur content and could be used for spreading around plants. People had done this for generations. Families who were not interested in gardening would knock on our door or come to the allotment to buy fruit and vegetables, or eggs from our hens in the back garden.

In the 1950s and 60s we used to have two dustbins - one for normal rubbish (not much in that) and the other for the ashes. That one was nearly full and was pretty heavy, but its contents were used for the garden.

One key to the difference between these two statements is the date. The mid 1950s saw the end of the rationing and shortages due to the Second World War. People didn't have to find a use for everything the way they had done in the past. The other key could be the affluence of the household, and their interest in gardening.

Of course there must have been a few families who wrapped their ash in newspaper and disposed of it in the dustbin for the dustman to collect, but this was by no means the norm.

So what went in dustbins for refuse collection was minimal; and very little went into landfill. If a large item had to be disposed of there was always the rag and bone man and dustmen would always take things for tip of a few coppers. This was a source of income for them because they invariably knew how to dispose of most things profitably. In my own lifetime, when black plastic rubbish bags came in, there was industrial action by dustmen who considered that they were losing a source of income by not being able to pick over the refuse. I think they got a salary rise.

In summary, most waste for collection in the first part of the 20th Century must have been made up of only miscellaneous incidentals. No wonder householders could carry their dustbins out to the pavement for collection.