Chickens and rabbits for meat and eggs in WW2 back gardens

Why so many chickens and rabbits

One of the spearheads of the Government campaign to make Britain more self-sufficient for food was to encourage the public to keep rabbits and poultry for meat. 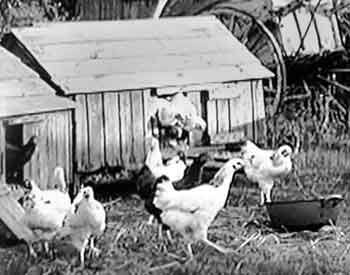 Consequently householders set up ways to keep livestock such as chickens and rabbits in back their gardens.

Our garden in one of the 1938 suburban houses was probably too small to keep livestock, and we never did although householders with the larger gardens of older or rural properties certainly did. As the excerpts in the following boxes show, it was an extremely worthwhile activity as so little meat was available on ration.

Feed for the chickens

It was possible to exchange a person's egg ration for chicken feed. This encouraged people to keep chickens, as the exchange paid off very well in terms of meat and extra eggs.

Our chickens were fed on a mash made up at home - bran from the corn merchant mixed with cabbage and left-overs - all stewed up together. Preparing the mash was a regular Saturday morning chore, making enough for the week. It made the house reek! But the eggs were plentiful.


For the chicken mash, every morning we boiled up potato skins with a bought flaky bran. I believe even this bran was allocated and overseen by the local police constable. We had neighbours who would save us their potato peelings in a lidded bucket kept at their front doorstep. In return I think we gave them eggs.


Home-made incubators to increase the stock of chickens

A wooden 'orange box' (actually a greengrocers' vegetable box), into which Granny placed frequently refilled old stoneware hot water bottles, was the make-shift 'incubator' for hatching eggs, although the survival rate of the resulting chicks was, as far as I recall, not impressive! She kept this contraption next to the hot-water tank in the bathroom. In my memory, the smell lingers still!

Any eggs we didn't consume, Granny traded with neighbours for a little extra sugar or tea. I know for a fact, that any rationed sugar, was kept for my sister and me.


My father had an incubator in the back bedroom, so we were completely self sufficient for baby chickens, as we had a cockerel as well.

As chickens were really important for food, they had to be kept safe like us in air raids. Our neighbours put their chickens into their Anderson shelter at night and spent nights with us in our Anderson shelter. We shared the eggs.


Killing and preparing the chickens for cooking

Chickens were killed for food as soon as they stopped laying eggs. We would all go and watch Dad wring a chicken's neck, and then we would sit in a circle and pull out the feathers. It was an unpleasant task because the small feathers got up one's nose. The remaining ones went into the compost bin. Chickens were cooked the same day that they were killed.

Why keeping rabbits was so worthwhile

Rabbits are very good at reproduction all the year round. so those families that kept rabbits had a never ending supply of rabbit and chips, stewed rabbit and rabbit pie. Rabbits were killed for eating whenever there were more rabbits than cages.

We had a shed where the rabbit cages were kept. At one time we had about ninety rabbits (many of them youngsters). There was one big old doe which had at least 14 litters (with about fourteen babies per litter). We had to collect their fresh green leaves from the roadsides and stuff a huge sack. It took forever to fill.

There was an old country 'gaffer' who would come and kill and gut our rabbits. He wore leather gaiters like Beatrix Potter’s Mr Macgregor. I expect he got the skins and a rabbit or two for his efforts.

How to prepare a rabbit for cooking

To dispatch a rabbit, you suspended it by its back legs with the left hand with its back towards you. Then with your open right hand you struck it across the back of its neck with a swift chopping motion. The rabbit was then disembowelled and a stick of wood was placed in the cut to keep the cavity wide open. The following day the skin was removed.


The value of a rabbit's skin in wartime

The skin was worth money from the rag and bone man who sold it on for winter boots and clothing. First, though, it had to be dried. My father stretched it tightly across a board, nailed it to the board and rubbed in salt. When the skin was dry, it was as stiff as the board, but was softened up by rubbing it together and pulling it over your knees.

(Mole skins could be dried in the same way. My first mole trap cost 2/6 [half a crown] from Woolworths but it soon paid for itself as we got 6d per skin. The skin was parcelled up and posted to an address in the Exchange and Mart. Mole skins were needed by plumbers for wiping lead joints, and were used for the purpose ever since Roman times. Moles were bred on an industrial scale wherever the Romans took their civilization. Nowadays pipes are copper and plastic rather than lead.)


Skinning and gutting our rabbits ready for cooking

There was an old country 'gaffer' who would come and kill and gut our rabbits. He wore leather gaiters like Beatrix Potter’s Mr Macgregor. I expect he got the s kins and a rabbit or two for his efforts.

Why meat to feed pets when it was rationed for people

Churchill said we were allowed pets because they were good for morale and if food shortages got really bad we could always eat them.

Meat for the dog

I seem to remember that the meat for our dog was poor quality in some way. Maybe it was alreadh going off, but I can't remember the details or where it came from. It had to be boiled to make it safe, and I certainly do remember that this made a horrible smell.

Pet too precious to eat

Each of our chickens was given a pet name and when the time came for one to be slaughtered, mother could not bear the thought of killing what she regarded as her pets. So we continued to have eggs but no chicken meat.