This page spans a wide range of dates, but is inspired by the sketch from the early 1900s and the photographs below of a rag and bone cart from the mid-1930s.

Sketch of a 1900s rag and bone man pinned with a note from my mother saying it reminded her of her childhood.

In the early years of the 20th Century, the rag and bone man travelled the streets with his horse and cart ringing a brass hand-bell and shouting out "Bones!" and "Any old iron!".

Probably the only difference over the years would have been the clothes that the rag and bone man was wearing.

How the rag and bone man traded

The rag and bone man would cover a district about once a week. So anything we thought he would take was put to one side for him. These were days of extreme hardship for many people. Nothing was wasted or thrown away.

Tap/click for a larger photo.

He took anything that he could sell on: old metal for scrap; rabbit skins for trimmings on coats and gloves; empty glass jars for use in jam and pickled onion factories. He played an important role of taking away unwanted material.

How rag and bone men were better than dustmen

The advantage of rag and bone men over dustmen was two-fold. They would take away large items and we got paid. The payment was not necessarily in money and never large. Sometimes it was sweets. I can even remember being paid with a goldfish and day-old chicks.

The rag and bone man's horse

When the rag and bone man came to our street, ringing his bell and shouting to let us know he had arrived, the horse would stop at each house and wait to see if any householder appeared. We children would take the horse some lumps of sugar. 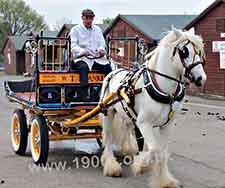 Over the years we got to know the man and his horse very well, Sometimes if the weather was hot, the man would hand my mother his bucket which she would fill with water. We would stand and watch as the horse gulped it down. If the man was thirsty he would dip his mug into the same bucket.


The origin of the name 'rag and bone man'

Rag was any form of clothing. As this was before the days of synthetic fabric, most cloths were either cotton or wool.

There was a vast market for the rags. Some of its uses included carpet underlay, mattress stuffing, and seating in trains and buses.

Bone was animal bone. As this was before the days of plastics, buttons on clothes were either bone or rubber. Also before World War Two most people bought meat on the bone such as a leg or shoulder of lamb, or a cut of leg of beef. The meat was roasted and fed the family for two or three days. Then the bones were boiled clean in a saucepan for soup, and then saved for the rag and bone man.

The market for the bones was for fertilizer. It was burnt into a powder and sold as bone meal. The origin of the word bonfire is 'bone fire'.

Another name for the rag and bone man

My father was at one time a rag and bone man, and he described himself as a 'totter'.

We always referred to rag and bone men as totters too. Where this name came from have no idea.

The end of the rag and bone man

At the outbreak of the wars most of the younger rag and bone men were called up to serve in the armed forces and the older men transferred to work elsewhere for the war effort.

There was what was called the National War Effort where everybody was asked to donate glass, iron, aluminium, glass, old clothing and paper, as resources for fighting the war. We were asked to take whatever we had to a designated area at the end of the road where great heaps accumulated. This was donated for free and collected by designated contractors.

After the wars rag and bone man did re-appear briefly, mainly using vans, although some clung to their horses. One only has to watch a box set of DVDs of Steptoe and Son to get a flavour of how they survived. Harold like his father had served in the army, but returned to the streets of London. Their old yards where the horses were stabled and where they stockpiled their scrap materials had been taken over for housing.

Today we have Council rubbish tips and car boot sales to take all unwanted household articles, a service that rag and bone men had provided for hundreds of years.