The need for ice delivery

When I was a child in the early 20th Century, there were no refrigerators. So shops like fishmongers and butchers had to use ice to keep their goods from going off.

The ice cart and the ice man

The ice was delivered to the shops in an ice cart which was easy to spot because it had ICE printed in bold letters on the side. Like all the other delivery carts, it was horse-drawn. The delivery man was known as the ice man. 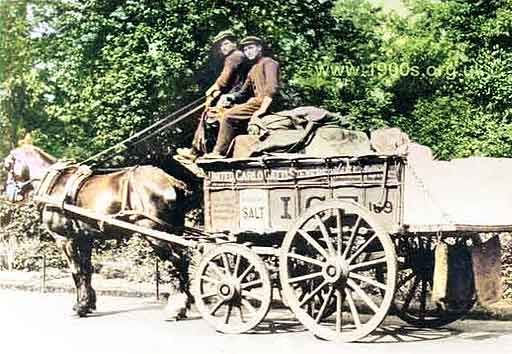 An ice cart delivering ice in the early 1900s. Photo courtesy of www.canalmuseum.org.uk

How the horses were kept calm 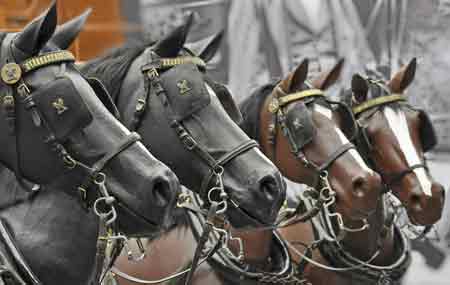 Blinkers, as worn by all workhorses in the early to mid 1900s and as shown on a small scale in all the photos of horses and carts on this website. The blinkers blocked anything but straight ahead from the horses' vision, which kept them calmer and more controllable. Photo courtesy of Peter Hambroo.

The ice was in long blocks about 2½ ft long, a foot deep and 8 inches wide. To reach the ice from the rear of the ice cart, the ice man used a long S-shaped hook to drag the blocks forward. He carried the ice into the shops using a padded sack over his shoulder for protection.

We children were always thrilled to see the ice cart coming along the street. The ice man had to use a lot of force to get his hook into the ice, and we would delight in picking up the bits that fell off. Goodness only knows what water source they came from and they were probably dirty from the cart and the road - but that never worried us. We had few such treats and would pop the broken ice into our mouths regardless.

It was easy to follow the ice cart around on its deliveries because cart horses lumbered along no faster than our own walking pace.

Where shopkeepers kept their ice

Shopkeepers did not of course have fridges. They kept the ice in large walk-in cupboards, known as ice cupboards, in the main shop.