Before fridges came into ordinary homes, every household had what was known as a food safe, also known as a meat safe for storing perishable items. 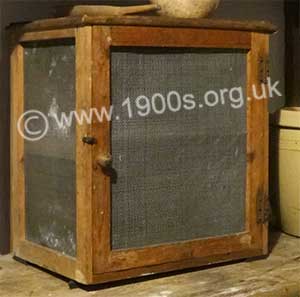 A food safe for a normal sized family. The jars beside the safe indicate its size.

A food safe was a wooden cupboard with doors and sides open to the air apart from a covering of fine galvanised wire mesh. This allowed the air to circulate while keeping insects out. There was usually an upper and a lower compartment, normally lined with what was known as American cloth, a fabric with a glazed or varnished wipe-clean surface.

Food safes were fairly small because they were primarily for rapidly perishable foods like meat, milk, butter and eggs. However one of the photos does show an extra-large one with three shelves.

Food safes were always placed where it was cool, shaded and draughty.

For ordinary households like those where my mother lived on the Huxley Estate, this was in the passage just outside the scullery door against the fence that was shared with the neighbour. Consequently the safes were in the shade of one or other of the houses for almost all of the day, and access was easy. Where possible, safes were at eye level, either on stilts or attached to fence posts. 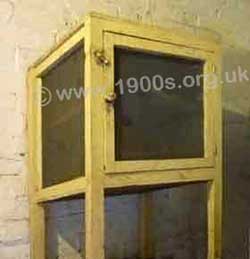 Food safe on stilts, of the sort kept in an outside passage in the shade.

In larger houses safes were often on shelves in cool, shaded rooms. The shelves were usually marble or tiled for coolness. 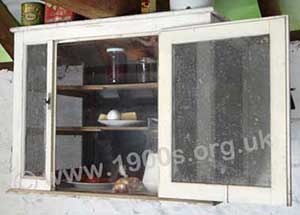 Later on, into the 1930s, when the layout of new houses did not lend itself to placing safes outside, there was often a built-in cool, tiled pantry or larder with a meshed window. If not, a shelf or standing room for a food safe had to be found somewhere. 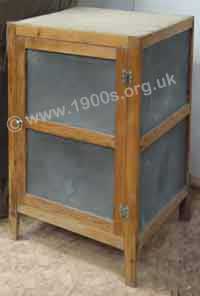