Kitchen tools and equipment before plastics

This page illustrates and comments on tools and equipment that were commonly used in food preparation and cooking before the middle of the 20th century, but are seldom, if at all, seen nowadays. I have personally used all the tools and equipment shown here or seen older people using them.

Potato peeler. Note the string round the handle which helped to keep the blade in place and gave a good grip. The string always got wet and mucky in use, so was very unpleasant to hold. It took ages to dry.

Mint and herb chopper. Mint grew in most gardens, and mint sauce was the accepted accompaniment to roast lamb. The mint leaves were placed in a chopping board and the tool was repeatedly rolled over them.

Food cover against flies, made of a metal mesh and very awkward to store because it couldn't be flattened.

Steel (not stainless steel) kitchen knife which needed to be sharpened regularly and so gradually wore away. See below for the knife sharpener.

Knife sharpener. The steel blades of the knife were drawn repeatedly across the sharpener, blunt edge first. Note the wooden painted handle.

Various aluminium and copper cooking pots: back left, a kettle; back right, a pressure cooker; front left, a copper saucepan (whose handle would have got very hot!) and front right, a regular saucepan with a Bakelite handle.

Egg saucepan. Before non-stick coatings, a small saucepan was kept specially for boiling eggs, because the scale from the boiling water built up inside it. 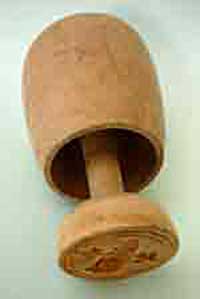 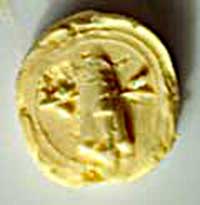 Wooden stamp for stamping out designs onto butter pats (when entertaining) and the resulting pat of butter. 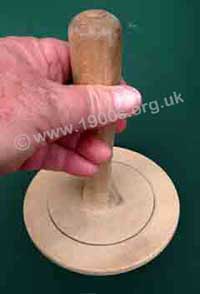 No, not a darning mushroom! It was much larger. When boiled cabbage was a common vegetable, it needed to be dried after cooking. So it was placed in a colander and the 'cabbage mushroom' was pressed into it to force the water out through the colander holes.

Toasting with an extending handle to keep hands reasonably cool while holding slices of bread close to a fire to toast.

A more elaborate everyday toasting fork for making the bread face the hottest part of the fire.

Butter knife, used for in the more up-market families for removing butter from the butter dish. (My own family used an ordinary knife unless they were entertaining.) 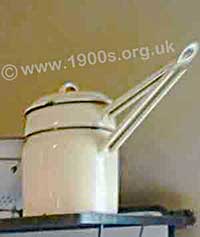 Enamel steamer. The food to be steamed is put into the top pan which has holes in the bottom. The lower section contains water. When boiled, the steam goes into the top pan and cooks the food there. Note that the pans are made of enamel. 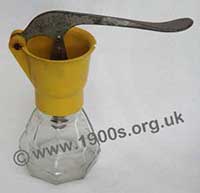 Cream maker. A specified mixture of unsalted butter and warm milk were put into the top container and forced through a nozzle by repeatedly pumping the lever up and down. This combined the milk and butter, so making cream drop into the glass jug. It was hard work and also time consuming as all butter was sold salted. So, before use in the cream maker, the salt had to be removed by pouring hot, but not boiling, water onto the butter, which dissolved the salt, then cooling the mixture until the butter almost solidified and scooping it off.

Glass butter dish, used widely when butter was weighed out and patted into shape at the time of purchase. 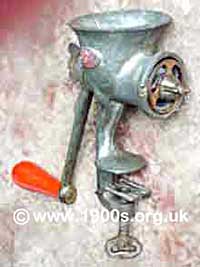 Meat mincer. When the remains of the Sunday roast had to last for the rest of the week, the remains had to be minced up for hash. The mincer screwed onto the edge of a table; then lumps or slices of meat were fed into the top and the handle was turned. There was a screw arrangement to force the meat through small holes and into an awaiting bowl. There were different fittings with different sized holes. 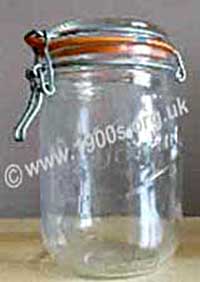 Jar for preserving fruit, generally known as a 'Kilner' jar. The glass jar was sterilized and heated in the oven, boiling cooked fruit was poured in, filling the jar to the brim, the lid was sealed shut using a rubber ring and a pressure clip to keep out air. 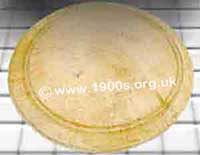 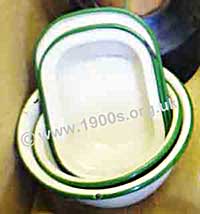 One cup tea maker. The loose tea was placed in the mesh case which opened or closed by squeezing the handle. Then the tool was placed in an empty cup and boiling water was poured on - rather like using a modern tea bag. 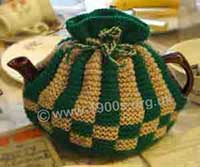 Tea cosy to keep the tea in a teapot hot. Note that it is made of knitted wool, layered to trap air for lagging.

Corkscrew with a wooden handle, once painted red but with the paint worn off.

Glass orange or lemon juicer. The fruit was halved and pressed into the central spike. The pips were caught in the inner ring of smaller spikes while the juice flowed out into the larger ring from where it could be poured off. 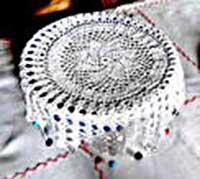 Butter coolers. See the page on food storage for an explanation.

No plastics - so what were the tools were made of?

These tools come from a time when there were no plastics readily available (other than Bakelite, an early very rigid plastic that chipped all too easily), no man-made fibres, no stainless steel and no non-stick coatings. So all the tools were made from one or more of the following:

Galvanisation is a process that stops iron and steel from rusting. Somewhat surprisingly the result is widely and wrongly known as tin - hence the tin baths that were kept outside in all weathers and were filled with water when in use. There were and still are many more examples. The photo is of part of a modern galvanised lamp post. 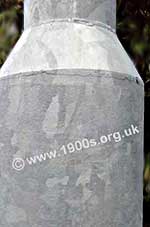 Galvanised iron is made by dipping the iron into hot zinc. The size of the blotches depends on how quickly the cooling takes place.

Galvanised iron has a typically blotchy appearance as shown in the picture.

Because of the development of plastics, fewer objects are galvanised today, but in the past it was common - see for example the goods in a typical old hardware shop.