The early days of pressure cookers and microwave ovens

Microwave ovens are in almost every home today, and most of us wouldn't think of a making meals or snacks without one. Yet cooking at speed is comparatively recent. Before the 1960s, cooking was either on an open fire, a coal-fired kitch range or in an electric or gas oven. These took time to heat up to the right temperature and needed metal pots and trays for the food. Then there was the assocated washing up. Acceptable still for some types of meal, but certainly not ideal for quick cooking.

The first development in speed cooking was the pressure cooker, followed some years afterwards by the microwave oven.

When my husband and I set up home in 1962 we considered ourselves very modern to have a pressure cooker. Microwaves were not in anyone's thinking at the time, although they soon would be. 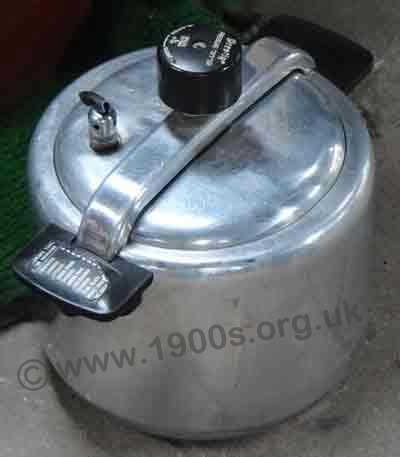 Pressure cookers cooked food much more quickly than ordinary boiling would have done, because the cooking was under a higher pressure so that the water boiled at a higher temperature.

The most common form of pressure cooker produced this high pressure by trapping the steam using a tightly fitting lid complete with a special safety valve in it. This safety valve was held shut with a weight or spring of some sort. Once up to pressure the steam then escaped with a constant hissing sound.

How to use a pressure cooker

As the food cooked in steam not water, it was put on a low rack inside the cooker with a relatively small amount of water. We got used to how much water, as it was important that the cooker should not boil dry.

Pressure cookers were only really useful for the sort of cooking that was traditional done by boiling, e.g. vegetables. Vegetables cooked in this way were said to be particularly nutritious because the goodness did not dissolve out into cooking water. The cooker could of course be used with fat for frying without its lid, ie at normal pressure. So some people partly cooked meat at pressure and then browned the outside in fact afterwards.

The danger of pressure cookers

In some ways, pressure cookers were dangerous, because if the valve outlet got clogged up, the pressure would rise dangerously high and the whole cooker would explode. Nevertheless, we used ours a great deal. Potatoes of a size that would take half an hour to cook by regular boiling, would cook in only 6 minutes.

Why pressure cookers went out of favour

With the advent of microwave cookers, pressure cookers became redundant.

The 'magic' of the first microwave ovens

I first heard about the 'magic' way of microwave cooking sometime in the early 1960s when I was in my 20s. I was teaching at a school, and the husband of one of the other teachers was an engineer. He had come home from a conference where he had seen a demonstration of cooking in seconds and minutes. None of us teachers really believed it when we were told about it. Maybe, we thought, it might work on a small scale in a laboratory somewhere, but it couldn't possibly affect us.

How wrong we were. Microwave ovens were quickly produced on a commercial scale.

Many potential customers were put off just as we teachers had been because it was simply 'impossible'. After all, we had used hobs, regular ovens or coal-fired kitchen ranges all our lives, as had our parents and grandparents before us.

These early microwave ovens were not without their problems, particularly as they had no turntables, so causing hot spots in the food. However, they rapidly became more sophisticated, and the news spread so that microwave ovens became, for most of us, an indispensable piece of kitchen equipment. Yet even as I write, I know older people born in the 1920s and before who still won't touch them.