The cooker in a modern 1940s UK suburban kitchen

The cooker that I remember in my parents' 1940s suburban kitchen was almost certainly also bought in the late 1930s. The reason is explained in the page about 1930s suburbia. 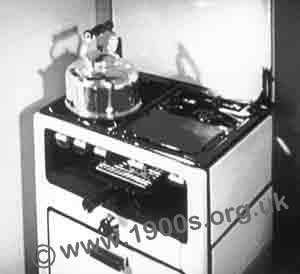 Gas cooker, bought in the late 1930s and used in the 1940s kitchen. Detail of a photograph which shows the very same oven that my family had. The kettle, though, is a later version - see 1940s kettle.

Cake tins were stored in a drawer integrated into the cooker under the oven.

The cooker - why always called the 'gas oven'

The cooker was powered by gas with a hob on top - although 'hob' was not a word that I heard used until much later.

Interestingly, because of my mother's childhood with coal fired kitchen ranges for cooking, this cooker was always called the 'gas oven' until her dying day. This was for the entire cooker, hob and all. It was never the 'cooker' or the 'hob' just the 'gas oven'.

The colour of the cooker

The oven and hob combination was really modern by the standards of the time because it was finished in white enamel with black fittings (in contrast to the more normal grey enamel of the cast iron grey of kitchen ranges).

The hob also had what was the then special feature of a pilot light for the hob - but not for the oven. Most of the gas hobs in other houses had to be lit with matches or a flint gadget.

How to light an old gas oven with no pilot light

My mother and granny both had squeeze type flint sparkers to light the gas cooker rings.

Later models of gas cooker around the early 1950s such as the GLC (Gas Light and Coke Company) or New World, had a lighter in a holster with a flexible gas pipe feed tube. A push button on the top would make the spark and feed the gas to the nozzle. The handle had an old type U11 battery in it. A long flame shot out of the end and you pointed it into the gas ring to light up the hobs accordingly.

Another feature of the oven was that it had what was known as a 'regulo' to set and thermostatically maintain the temperature of the oven. This was really novel for my mother who was used to old coal-fired kitchen ranges. To her dying day, she insisted that the kitchen and outside door had to be kept shut while she was cooking a cake, so that the oven wouldn't cool down. She refused to understand thermostats.

The hob had a white enamelled lid that could close down, presumably for tidiness. However, it never was closed down in our home. The kettle had to stand somewhere and the open hob was the best place as it would have eventually scratched the enamel lid of the hob.