The master bedroom of a UK suburban house in the 1940s

The 1940s bedroom was largely furnished before the outbreak of World War Two. The reason is explained in the page about 1930s suburbia.

The bedroom furniture was dark wood, which added to the general dark effect of the room. It was solid oak, not veneered, and certainly not a plastic look-alike, as there were no such plastics at that time.

The solid wood of the 1940s - and indeed of previous years - never had the clear-cut edges of modern veneered wood or plastic look-alikes, so always tended to look rather tatty. However, we knew no different, and my mother polished all the wooden surfaces repeatedly with Mansion Polish which made them shine. 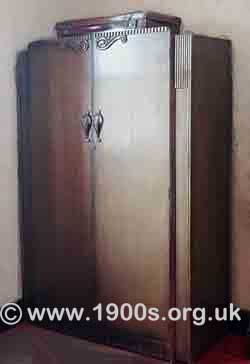 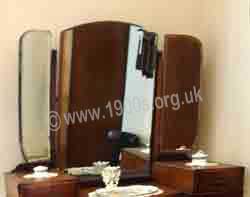 The floor was covered in a dark brown marble-effect lino or oilcloth. Linoleum (lino) and oil cloth were made by different processes but as far as I was concerned, they both looked the same. They were thin compared with vinyl flooring and where there was a lot of use, such as where chairs and castors rubbed, they cracked, showing a heavy canvas backing.

The walls had picture rails, as illustrated on the parlour page, and there was a drop ceiling which was whitewashed. The walls were papered in a non-descript colour, and the woodwork - picture rails, window frames, window ledge, door, doorframe and skirting - were painted magnolia. Magnolia was a creamy-white, and in spite of my mother's polishing, I always thought that it made paintwork look dreary and did nothing to lighten the overall impression of the room.

The skirting was much more high and bulky than in later houses. My parents always called it wainscoting, pronounced 'wainscoating', although the wainscoting of the Victorian terraces was higher still, up to about a metre.

The bedroom windows and curtains

The window was a bay one, which was common but not standard in suburban houses of the period. The dressing table was in the bay, but not completely set in, so allowing room behind for the curtains to be pulled.

The main curtains were heavy brocade and the net curtains were mesh. I don't know why the net curtains were not lace-style net as it must have been available just before the war when my parents married. Perhaps what money they had went on other things so that by the time they could afford proper net curtains, no net was left in the shops because of the shortages of the war. Whatever the reason, the 'net' curtains were the sort of mesh developed to stick on the windows of the London Underground to prevent them shattering in bomb blast. Not that the mesh was stuck onto the bedroom windows:  it was hung in several sections, loose like curtains. I have no idea how my parents got hold of it.

The bed with its eiderdown

The bed was a standard double, 4 ft 6 inches wide.

The sheets and pillowcases were white linen, not cotton. I don't think I ever saw coloured sheets anywhere.

The blankets were thin cream wool, with a blue band at the edges and hemmed with blue blanket stitch.

The bedspread was a creamy grey fabric with a pattern woven into it.

On top was a gold-coloured eiderdown. 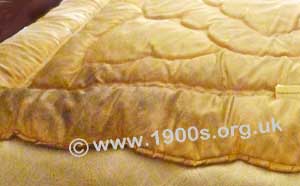 Double bed with its eiderdown on top. It would have been made of a shiny, silky material. My parents' eiderdown was gold coloured, as shown, photographed in the Straw House. 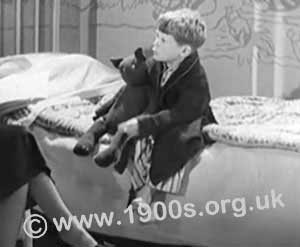 I never had an eiderdown on my own bed, so I can't speak from experience. It does seem to me, though, that they must have been uncomfortable things. They were not unlike duvets except that they were quilted in a pattern, presumably filled with the soft downy feathers of the eider duck and of a size just to fit on the flat top surface of a bed. They were not wide enough to cover two people once they had got into bed, and I can only assume that couples were cold along one side and warm along the other. As they tossed and turned in their sleep, the eiderdown was bound to slip off one partner and even off the bed completely, because its shiny, silky material was slippery. As eiderdowns were used on the top of the bed, they never touched the body, which was fortunate since there was no way of washing them and they didn't have detachable covers.

There was a bedroom chair with dark wooden arms. I don't think it was ever used for sitting in; rather it was somewhere to lay out clothes for the following day.

There was no long mirror anywhere in the house, although if one positioned oneself carefully, it was possible to see almost all of oneself in one of the side mirrors of the dressing table. 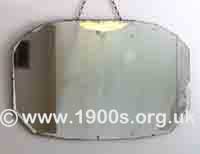 Between the two chests of drawers was the gas fire, which I never saw lit, and over the fire was a mirror hanging from the picture rail.