The sink and draining board that I remember in my parents' 1940s suburban kitchen were fitted in the late 1930s. The reason is explained in the page about 1930s suburbia.

The sink and taps

The design of the sink was like the early 1900s sink of my mother's childhood except that there was a hot as well as a cold tap. Both taps came out from the white tiled wall. I have never seen an identical arrangement in any of the museums I have visited, so there is no accurate photograph.

Stoneware sink, common in kitchens and sculleries before the 1950s. The left hand edge of a wooden draining board can just be seen on the right. A white tiled wall would be behind. 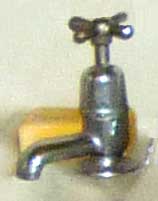 Typical tap with large gripping knobs. There were two of them, plumbed directly into the white tiled wall behind. 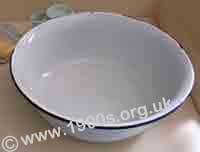 Enamel washing-up bowl, common before the 1950s when plastics came on the market.

The sink was the standard large white stoneware. (Stoneware is made from a special clay and fired at a very high temperature so that its hardness resembles stone.)

The sink was mounted in position on metal brackets. It held a dishcloth and a white enamel bowl for washing up. On the floor underneath the sink was a space with various other bowls and buckets plus the standard household soap with a carton of washing soda. In many houses, this area was hidden with a short curtain hung on wire, but my mother disliked that arrangement and our area was in full view, U-bend and all.

Both the soap and the soda were used together for washing up.

The sink had a white enamel draining board attached which I never saw on other housing estates of the same period. There, all the draining boards seemed to be wooden. In fact, it took me some years to find an enamel one to photograph. I finally found one in Llanerchaeron House in Wales. 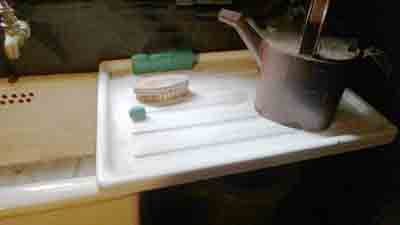 White enamel draining board, mounted against the sink on metal brackets. 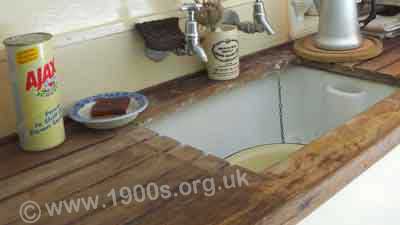 
Our enamel draining board was mounted on visible metal brackets at the side of the sink.

I always thought how clean our draining board looked compared with the wooden ones. Bare unvarnished wood always looks rather grubby when wet. I suspect that enamel draining boards were more expensive than wooden ones. They did chip, though, which left black marks.

The end of these sinks and draining boards

Years later, sink and draining board arrangements were replaced by integral sink units with cupboards underneath. There were no integral sink units in ordinary 1940s houses, in spite of what museums and magazines may imply. I cannot of course speak for better-off households, but since design is led by availability of materials, I doubt it.

Before the mid or late 1950s, the space under our draining board was empty, except for the occasional bucket or bowl, sometimes with a short curtain hiding it. When my mother was persuaded to part with her old mangle for a spin dryer, that space was where it went.