How people washed themselves in the Victorian home

In the early 1900s when I was a child growing up on the working class Victorian housing estate, it was a matter of principle that we - and indeed adults too - were kept clean.

We washed every day in the scullery in a little alcove with a curtain across that provided some privacy.

The 'wash basin' - the scullery sink

The 'wash basin' was the sink that was used for washing up.

It was a large box-like 'glazed stone' affair with a single brass cold-water tap in the wall above it.

Sometimes we used an enamel bowl in it. 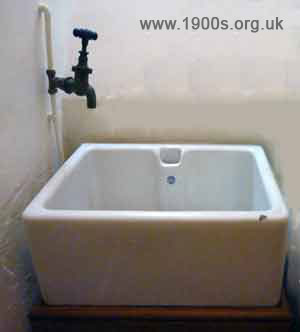 Stoneware sink with a single brass cold water tap above it. Photographed in Fagans Museum of Welsh Life.

A wooden soap box was also on the wall. No exotic soap ever found its way there. It was always general household soap, usually Sunlight, which invariably had little pieces of grit embedded in where my mother had used it to wash the floor. I don't think our complexions suffered as a result. I was reputed to have had a very good complexion as a child.

Sunlight household soap, used for washing the floor as well as washing oneself.

So the Sunlight soap did little harm, although I well recall having little patches of dry skin in on my chin in the winter. This was quite common with most children and was treated with Vaseline.

The temperature of the water

We usually washed in cold water, but sometimes as a luxury we had warm water if the copper was lit, or if someone bothered to boil a kettle on the range.

In summer when it was too hot to light a fire, the kettle was probably heated on a primus stove. My cousin who lived with my grandparents in World War Two reports that that was what happened there.

Flannels were squares of towelling.

Being washed as a young child

I always remember my great grandmother washing me at the scullery sink. It wasn't a case of just wiping sticky hands. It was a good old wash, and my ears burnt for hours afterwards. Her generation seemed to have a thing about ears. It was always, "Have you washed behind your ears?". It could have been why earache seemed so prevalent in those days. We children always had a twisted corner of the flannel rammed down our ears.