A gas street lamp, a detail from a larger photos from the early 1900s.

When I was a child in the early 1900s, the street lights ran on gas and were lit by teams of lamplighters.

The street gas lights worked the same way as the house gas lights in that the flame from the lighted gas heated up mantles which became incandescent and gave out light.

Street lights gave out more light than house lights because there were more gas jets to a lamp, each with its own mantle. When the mantles needed replacing, which was more often than they were actually replaced, the light flickered so that shadows seemed to move.

The light from the street lamps

The light from the gas street lamps was greenish, eerie and flickering. Both my father and I on separate occasions thought we saw a woman ghost in our front bedroom, but I didn't want to think of such things and put it down to the eeriness of the flickering shadows. 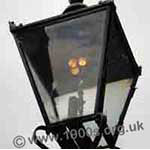 Gas street lamps gave out a circle of light which didn't spread far. In between the lamp posts was dark.

Shortly after the Second World War clockwork timers started being installed in street lamps. Then the light came on automatically every evening and went off automatically every morning - which meant the end of the lamplighter. Nevertheless, every so often a man with a ladder would still visit each lamp to wind up the clockwork mechanism.

Also every so often during the day a man came round with a ladder to service the lamps or to repair the panes of glass that often got broken. Council men would also come round to paint the lamp posts which were made of cast iron.

Shops had their own gas lamps outside in the street, to light their window displays in the evenings and in winter, and to give a welcoming feel. These privately-owned gas lamps also contributed to the general light on the streets. 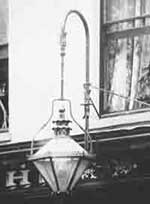 Privately owned lamp outside a shop. Detail from a photograph in Farnham Museum. 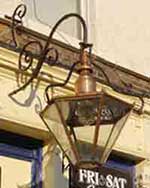 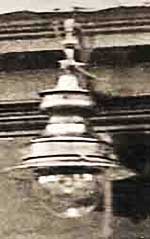 Lamp outside a terraced house used as a draper/haberdashery shop.