The meaning of 'draper'

'Draper' is a word that has gone out of fashion. Before around the middle of the 20th century, it meant a shop that dealt with fabrics, sewing items and clothes.

A typical drapers shop and shopkeeper

When I was a child on the Huxley Estate in Edmonton in the early 1900s, our local draper's shop was in Silver Street, kept by the Roth family, and it was typical of other drapers shops I saw.

Mr Roth was always in the shop but when there were a lot of customers he would call to his wife, who was upstairs, "Are you busy my dear?" She would reply, "I'm always busy", but she would always come down to help.

The shop was fascinatingly tiny, with so much merchandise that there was hardly room to get in. Yet Mr Roth always seemed to have whatever you wanted and could lay his hands on it immediately. Nothing was pre-packed, so if you only wanted a yard of tape or elastic, he would measure it out and cut it off for you. 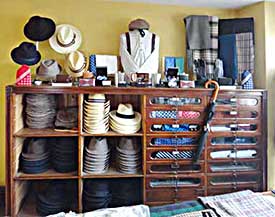 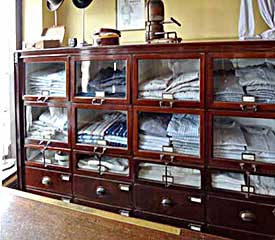 
How drapers' wares where priced

Farthings [quarters of old pennies] were coins used a lot in the drapers, and if our mothers were owed a farthing in change, they could opt for a small sheet of pins instead. The sheet was always blue and was about 6 inches by 4 inches.

The Roth family of Edmonton drapers

Two of the Roth children were about my age: Leonard Roth and Queenie Roth who were outstandingly brilliant. Queenie went to The Latymer school like my brother, Jim, and she and her brother went on to university.

According to the Roth's granddaughter, Kate Varney, 79 Silver Street was the address of the shop. The family lived above it - which fits with my mother's recollections of where Mrs Roth spent most of her time. The Roths moved to 74 Silver Street in Pymmes Villas during the 1920s. Mrs Roth was killed in the bombing. Mr Roth was dug out alive after two days and lived until 1953.

Doreen Buckland remembers from the 1930s that it was amazing how Mr Roth could find anything in his shop although it was so untidy. Her mother always said that her sideboard looked like Roth's counter when her children piled things on to it!

I feel a certain bond with the family because they lived in one of the large houses in Pymmes Villas, Silver Street which was destroyed, along with my husband's Clarke family's house there, in the German bombing of World War Two.

I knew that Mr Roth was in hospital and asked for his bible, and I wish I had asked about Mrs Roth, but I had moved out of the area by then and the bombing of the Clarkes took all my attention.

A draper/haberdashery shop in a Victorian terraced house

This image of a front-room draper's shop inside a small Victorian house shows to many interesting features. 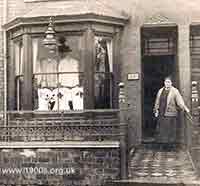 The shopkeeper's name is to the left of the door and a shop gas lamp is over the display window to illuminate it.

The outside of a 1925 fancy draper/haberdashery shop in the front room of a Victorian/Edwardian terraced house.

The photo shows how widespread was the style of the Victorian/Edwardian terraces as there is so much similarity between this house in Leicester and the Victorian/Edwardian terraces in North London: the typical tiled garden path (which would have been tiled in red and black), the wrought iron front railings on a low brick wall and the sash windows.

The photo is courtesy of Gary Fleet. The shopkeeper is his great great grandmother, Eliza M. Mcauley (1858-1941), at Green Lane Road, Leicester.