Hardware shops or ironmongers were always known as oil shops in our family when I was growing up in the early 1900s, possibly because this was what my mother regularly bought there - actually it was paraffin. She would have to take a special can with a long spout along and buy the oil by the pint. Perhaps it was the oil that gave these shops a special smell of their own.

In fact the proper name for these shops was ironmongers, although the name hardware shops has taken over more recently.

As well as oil, ironmongers also sold all sorts of goods for homes and gardens.

The gas mantle was bought from the oil shop, too. It came in a little cardboard box.

The shop also sold firewood. This was stacked like a wall in front of the counter in bundles, about a dozen in a bundle, about 6-8 inches long, half 1 inch thick.

The second of the following images enlarges on tap/click to show more of the items sold. In addition to those already mentioned, I have noted a china vase, a cane flower pot cover, tin buckets, an enamel saucepan, an aluminium saucepan, a cane shoppng basket - and that is just from the top level. What else can you see?

How goods were displayed in old ironmongers

As much as possible was crammed into the shop window or hung up inside and outside from windows and door frames. The rest, where space permitted, was hung from the shop ceiling. 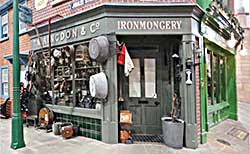 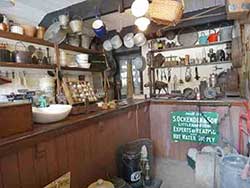 Inside an ironmongers shop in the early 20th century. 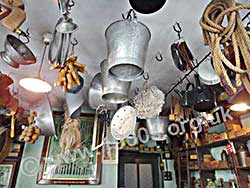 Our local shop in Edmonton was owned by Mr Bryant and was on the corner of Sheldon Road and Silver Street.

Information from the 1911 census

The 1911 census shows that my mother's memory was absolutely right: It shows that Alfred Bryant describes himself as an oilman. He was living at 77 Silver Street, probably above his shop, with his wife Catherine, 56, who assisted with the business and his daughter Mabel, 17 born Bethnal Green. He, like his wife, was born in Stepney.

Pat Cryer, webmaster and daughter of the author

Page based on the recollections and notes of the webmaster's mother (1906-2002) with additional research and editorial work by the webmaster.

Photos taken by the webmaster with acknowledgements to Amberley Museum, Milestones Museum and The Blackcountry Museum.