Gas lighting in the Victorian and Edwardian home

When I was a child growing up in the early 1900s, we considered ourselves very fortunate that our house had gas lighting laid on. Few working class households in the early 1900s had it. (Electric lighting and gas heating and cooking came to our Victorian style terraces much later.) My grandmother on my mother's side only ever had oil lamps and candles, but we lived on a housing estate that was regarded as modern and state-of-the-art at the time. There was gas lighting in the streets, too.

When and how often gas lighting was used

Gas lamps were quite a bother to light and had to be lit every time we wanted light. So they were only lit when someone wanted to stay in a room for some time.

For short-term and emergency use, we either moved around in the semi-dark or used candles, lit with matches.

There was always a box of matches and a candle in a candlestick beside our beds at night. We were, though, discouraged from using them, because of the fire hazard and because of dripping wax over the floor or furniture. Anyway our eyes were quite used to the dark and there was some dim light at the front of the house from the gas streetlamp along the road.

We had chamber pots so that we didn't have to go outside to the lavatory at night.

Gas lamps worked by heating something called a 'mantle' with a gas flame. The mantle then glowed brightly, lighting up the room. Lamps had two chains: one to turn the gas on and the other to turn it off. These chains could also adjust the flow of the gas and hence the brightness of the mantle. 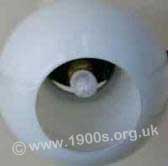 Inside the shade of a gas lamp showing the fitting of the gas mantle. 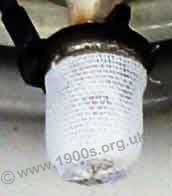 A mantle for a gas lamp, showing its structure. 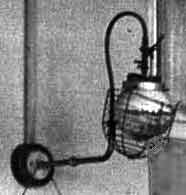 Protection for the fragile mantle to prevent inadvertent breakage, an example in a school photo.

A mantle at the moment of lighting. Detail of a screen shot from an old film.

The invention of the gas mantle

The mantle was invented and perfected in Preston, Lancashire, UK, in and around 1817.

Not all gas lamps had mantles 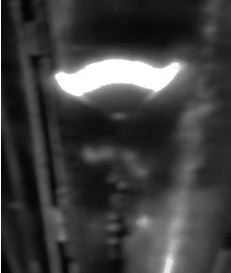 Before Carl Auer von Welsbach invented the gas mantle, all gas lights in homes and street lights had simple gas jets like the one on the scullery page and in the picture. They all pointed upwards.

In the home these lights were covered with glass globes (or something similar) to look ascetically pleasing and to protect the flame from being blown out. People certainly did not want to entertain friends and family on a Sunday evening in a room with what would look like a medieval torch attached to the wall!

However, this arrangement was extremely inefficient: To get as much light as possible, the gas had to be turned fully up, resulting in large sheets of flame rising towards a ceiling. Also, because the lamp had to be point upwards, the illumination was also directed upwards, i.e. at the ceiling rather than where it was needed. So the usable light for a given amount of gas was minimal.

The invention of the gas mantle changed this. It enabled gas lights to have a small flame and to direct their light downwards.

The reason for the gas jet in an old scullery not having a mantel was because it was the old style of gas light. The scullery was a room for cooking, not socialising, so its light did not have to be ascetically pleasing. Set on a wall in the corner of a room, the naked gas jet offered enough light for cooking and cleaning, but, as it didn't have a mantle, it was also relatively robust if it got knocked.

How to strengthen gas mantles

Gas mantles were extremely fragile, and once they had been heated, they crumbled very easily indeed. They were made from a material that looked like a fine honeycombed silk. To protect them; to spread their light; and of course for decorative purposes, there was always a glass cover of some sort screwed round them. In our house, this was a globe: the top half was milk-white frosted glass and the lower half was frosted with a pattern on it. There were, though, other colours and shapes.

Mantles, being so fragile, had to be replaced quite frequently. We bought new ones from the oil shop, each one always in its own cardboard box to protect it.

How gas mantles were bought and fitted

A gas mantle came from the shop as a small, flat fabric mesh bag which was impregnated with a metal salt.

When first fitted to a gas burner, the bag inflated, the fabric was burnt away and the salt oxidised into a very delicate rigid structure, the same shape but somewhat smaller than the inflated bag.

Mantles could be strengthened by soaking them in vinegar. They were ready for use when dry.

Then, in use, the gas was contained by the mantle bag. At the multitude of holes in the mesh, it met the air and burning took place; the mantle became white hot, so giving out light.

After first use, mantles were so delicate that the slightest knock made them disintegrate. Partially disintegrated mantles were common, which made the light flicker and produce moving shadows. Then the mantles needed to be replaced.

How gas lamps were lit

We did the lighting with a match through a hole in the bottom of the globe, taking care not to touch the fragile mantle. Some families used wax tapers which were like very thin candles about 8 inches long. These, being longer than matches, were easier to use, although they did have to be lit with a match first or from the fire, and it was all too easy to touch the mantle and for drops of the wax to fall off.

When the gas was lit, it made a popping sound. 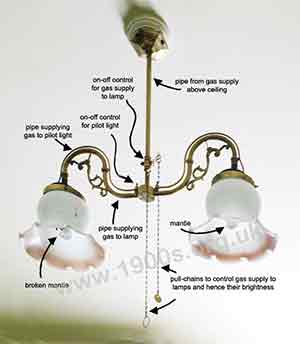 Ceiling-style antique gas lamps showing the pipes for carrying the gas for the pilot light, the mantles and the chains to control the flow of gas and hence the brightness of the glowing mantles.

Tap/click for a larger image with legible labelling.

I have fond childhood memories of Sunday visits to my grandparents who had gas lamps. The highlight of the visit was my being allowed to 'light the gas' with its associated popping sound.

The lamps in some houses, particularly in later years, had pilot lights which were alight all the time and which delivered the gas through a narrow tube. This tube was usually made to weave and curve in exactly the same way as the main supply pipe, so that it looked like part of the decoration, as in the photo below. Such lamps could look very pretty, particularly when they were in a group arrangement.

The gas for the lamps in most rooms of the house came in through a pipe from the centre of the ceiling, as shown in the above labelled photo, and some had the pipe in the wall. 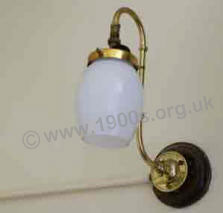 A gas lamp powered by a gas pipe in the wall

I felt that both were attractive, provided that there was a mantle and a light shade. In our house, all the pipes were hidden.

some places, though I saw the pipes running along tops of walls, as if the gas supply had been added as an afterthought. I always thought that this looked very ugly.

Many houses at the outbreak of World War Two were still using gas for domestic room lighting. My family had the old gas fittings on the wall at 153 Bulwer Road, Edmonton. Although we had been converted to electric lighting by this time, Dad retained the gas fittings, as he did not trust the new fangled form of lighting by electricity.

Unless otherwise stated, the lamps on this page were photographed at the National Museum of Wales.