In the early 1900s when I was a child, my father used an old-style open razor, often called a 'cut-throat' razor for reasons that will become apparent. He kept his shaving equipment in the sink alcove in the scullery which was the only one in the house.

The shaving equipment consisted of a shaving brush, a specially shaped china shaving mug and the razor. A man's shaving mug and brush

The razor had an open blade which folded inside a handle when it wasn't in use. It needed to be kept very sharp and a slight slip of the hand while shaving be dangerous - hence the name of 'cut throat'.

Men were quite experienced at using the razor safely but it was still quite common to see them with cuts on their faces from shaving.

An 'open' man's shaving razor: a very sharp blade which folded inside a handle

Shaving with an open razor

The kettle was boiled and the shaving jug filled with hot water. Then for the actual shaving, the beard area had to be lathered with soap, so that the razor slid over it easily. The lathering was done on the skin with the shaving brush.

The skin was pulled taut and the blade slid against the direction of the hair growth, cutting off the hair at skin level. As hair and lather accumulatedon the blade, it had to be shaken off in the water in the shaving mug. 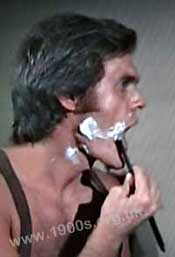 Shaving with an open razor.

How the razor was sharpened

The blade was sharpened on a special leather strap called a 'strop'. This had a fine powder applied to it to act as an abrasive. Both sides of the blade had to be stropped. 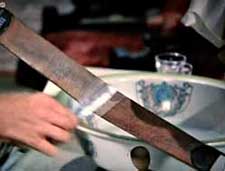 Razor being sharpened on a leather strap known as a strop

Safety razors were definitely safer than the old, open, cut-throat type, but they had their own problems when they first came onto the market. The blades were made of carbon steel as in the Thin Gillette, Blue Gillette and 7 O'Clock brands. They needed to be rinsed and dried between uses which usually meant that the razor had to be opened up, the blade extracted, rinsed, dried and replaced - rather a rigmarole! My father's and grandfather's razors even needed to be unscrewed to achieve this.

Page based on the recollections and notes of the webmaster's mother (1906-2002) with additional research and editorial work by the webmaster. Photos by the webmaster with acknowledgments to West Somerset Rural Life Museum and Fagans Museum of Welsh Life