The main problem with the more widespread copper water heaters was that their fires had to be laid in advance, stoked and cleared away after use. How much better if hot water could be available on tap.

In fact hot water was available on tap in those more up-market Victorian and Edwardian houses which had spare space and a gas supply. It required what was known as a geyser.

Description and how they worked

Essentially, a geyser was a tall container that which used gas to heat cold water from the mains.

The design improved considerably over the years. The next section is about a very early Victorian geyser which gave good service well into the 20th Century.

The photo shows an early Victorian geyser. It is made of copper and is about 2'6" feet high and 10" across. 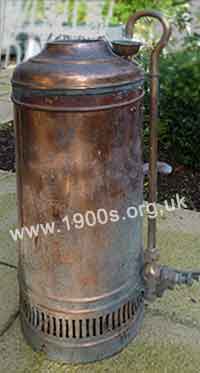 Victorian copper geyser for heating water.
Although shown standing on a surface, it was wall mounted in use, as seems to have been the case with most geysers.

To get hot water, cold water was fed in via the tall external pipe shown in the photo. (See below for enlargements of the connections.) The pressure of the mains water forced the water upwards and out of the kink at the top into the little bowl and onwards into the geyser. The bowl prevented splashing down the side.

Inside the geyser, the water was heated by gas jets in a container at its base.

The ring of gas burners

As our geyser was wall-mounted, you could look up inside it when it was lit and see all the flames from the ring of individual gas burners. 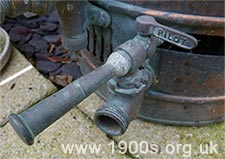 Detail of the gas pipes' entry point. The control for the pilot light is clearly marked 'PILOT'. The entry connection for the cold water is just visible on the far left.


The hot water was delivered through the sprout at the side of the geyser, shown in the second of the above photos. The temperature of the hot water could be managed by adjusting the supply of gas to the flames and the rate at which the water flowed. The spout is some way up from the base to allow some sort of receptical underneath. The geyser was normally either placed on a stand or attached to a wall so that the spout could be over a bath or basin, so allowing the hot water to run directly into the bath or basin.

The top of the geyser was open as an exhaust for the hot air from the gas burners.

The typical noise of a geyser lighting up

Everyone who has ever been with a working geyser remembers the noise that it made when starting up.

My parents had one geyser in the kitchen and another in the bathroom. When they were switched on, there was a loud 'whoosh' as the pilot light in the unit ignited the multiple gas flames. It always seemed to be remarkably efficient and of great interest to a small inquisitive boy!

Our geyser was a cylindrical metal water heater, about 4 feet high, with a long downward pointing pipe for the hot water to flow out. It may have had some decoration, but I can't be sure now. It had a circular gas switch on the side which turned the gas on. It made a great whoosh sound as the gas jets lit from the pilot light. Of course we had to have the requisite amount of shillings for the gas meter.

This recollection comes from our flat in a street full of large late Victorian villas.

The geysers were advertised as providing instant hot water, but this was not quite true. They probably took just under half a minute to warm up from cold. The temperature could be set hotter or colder by adjusting the flow of gas.

The hot water supply from our geyser was endlessly slow.

Later geysers improved considerably in both design and efficiency. 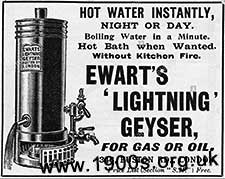 Advert for a still relatively early geyser. The cut-away sketch particulary clearly shows the positing of the gas burners, the vents around them for air intake and the connection for the water input, but not shown is its tall delivery pipe. 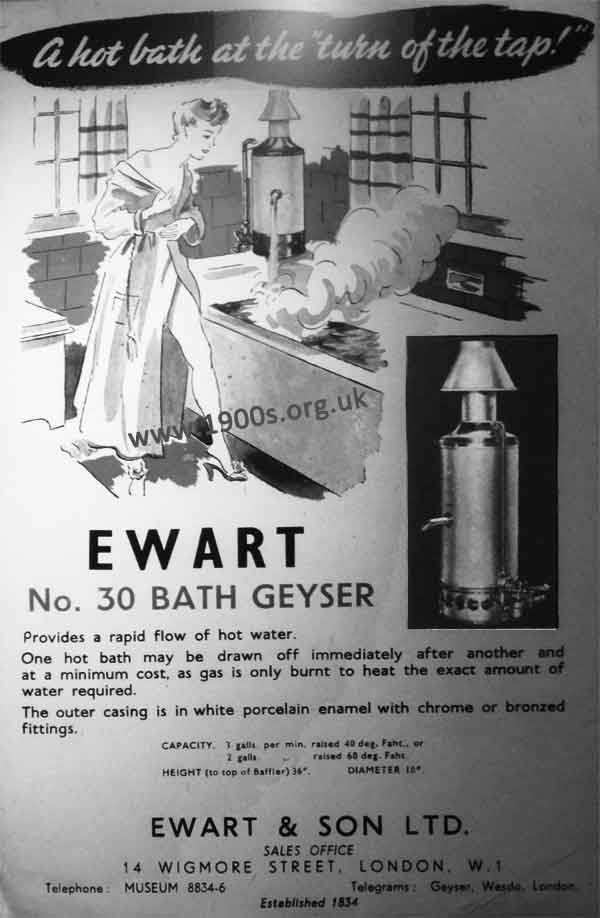 Advert for a 1950s geyser with a realistic drawing showing it heating a bath.

Adverts from old newspapers in the family of Lewis Elton

The geysers which I knew were all slightly different in detail. Some, for example, had a swivel outlet for the water.

The one in my 1950s sports club house was probably already old when I knew it. It was smaller than the one that Stefany Reich-Silber describes, perhaps only about two feet high and was over a wash basin - but it was certainly called a geyser, not the more modern Ascot.