The lamplighter who lit the early gas street lamps

When I was a child in the early 1900s, the streets were lit by gas street lamps.

Every evening the lamplighter used to come along on his bicycle to light the street lamps, carrying his ladder over his shoulder. It was a wooden ladder which must have been very heavy, unlike the aluminium ones of later years. I often wonder now how long it took him to do his rounds and how large his rounds were.

How the lamplighter lit the streetlamps

As well as the ladder, the lamplighter carried a pole with an ignition lamp and hook at the top. He used the hook to pull open the lamp window, pull down one of the chains to open the gas supply and he used the lamp on the pole to light the gas. 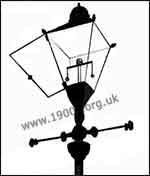 A street lamp with its bars for the lamplighter's ladder, the hinged glass pane open for access and the chains for opening and closing the gas supply.

Today the bars often double as support for a road name or plant troughs.

For simplicity the sketch is not to scale and shows only one mantle whereas in practice there could be up to six.

Based on sketches by Malcolm Head and Bob Ward.

There were horizontal bars near the tops of the street lamps for the lamplighter to lean his ladder against when he needed to go up to check inside the streetlamp. His ladder was pointed at the top to fit into the width of a bar.

Once one streetlight was lit, he moved on to the next one.

The lamplighter's pole was also known as his lighting stick.

The top end of the lamplighter’s pole had a rounded point to push open the panel and permit the chain/lever to be pulled to turn on the gas.

One type of lamplighter's ignition light at the top of his pole. 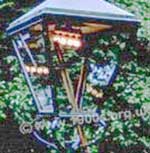 Lighted street lamp. Note the four mantles and the pole reaching up inside

Lamplighters generally used ignition lights or lighting sticks that were an open flame running on calcium carbide and mounted at the top of their poles. Calcium carbinde generates inflammable acetylene gas when water is added. The flame jet is almost impossible to blow out and was used for miner's lamps in mines.

I think that the reservoir of wet calcium carbide in the lamplighter's lamp was big enough to last the full shift. The flame looked about 3-4 cm high, but it could easily be adjusted by a valve knob.

The lamplighter carried the ignition light throughout his round. It did not go out until the end of his shift when he would unscrew the filling cap of the reservoir and pour the contents into a street drain.

My memory is that streetlamps were lit before dusk had fully fallen. As a kid I never saw the morning round to extinguish flames but obviously there would be no need for a flame from his pole, just the pole to push open the streetlamp and move the lever or pull the chain. I’m guessing that this would be done after dawn had come enough to see around.

How often the ladder was needed

My memory says that the lamplighter only needed the ladder occasionally when the streetlight didn't light at the first bidding - possibly because it needed a replacement mantle. If it worked fine, he did everything from pavement level usng his pole; if it didn't light, he needed the ladder for closer inspection or maintenance.

My memory from the 1940s is that the ladder was wooden and tapered to a point at the top, probably better to fit against the bars of the lamppost and to cut down weight. The lamp­lighter carried his ladder on his shoulder as he walked between the street lamps. 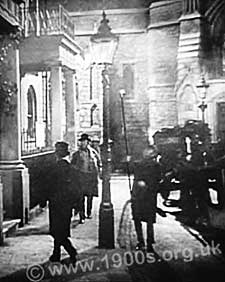 Enhanced screen shot from the 1940s film Gaslight. Here the lamplighter is using his pole and lamp to turn on the gas and light the street lamp. 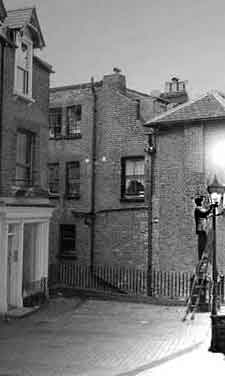 Computer composed photo of a lamplighter by Laurie Prior as remembered from the 1940s. The lamplighter is climbing his ladder to attend to the lamp.

At home my family had a strange shaped ladder which tapered to a point. Now, reading this page, I know the explan­ation: In the 1940s and early 1950s my father was a lamplighter in West Hartlepool (just Hartlepool nowadays). When the lamps went over to electricity later in the 1950s, the ladder was probably surplus to requirements and was given away.


Similar pointed ladders used to be common in orchards because the pointed tops could more easily poke through the branches of the trees.

Every evening just before it got dark, a lamplighter on a bicycle came to turn on our streetlamps. He arrived with one hand holding a wooden pole and ladder over his shoulder, the other hand steering the bicycle. He would stop at each lamppost and reach up with his pole to turn on the gas. He would insert the pole into the vent at the bottom of the glass case and push a lever into the 'on' position. (Some lamps had a chain instead of a lever and a pilot light.)

In the morning the whole process had to be repeated to turn the light off. Very labour intensive.

Looking at images of lamplighters it is obvious that gas streetlights came in many shapes and sizes.

There were many different styles of street lamps, some with a bottom opening access panel which closed by gravity, some needing one of the big side panels to be swung open.

It follows that the poles and ladders also varied according to the heights and types of access to the interior. Where I lived, and probably widely elsewhere, the streetlights were just high enough to prevent easy access from the public while providing enough light to spread at halfway or so to the next streetlight. This allowed a more easily carried short ladder and pole to be used, making the work easier for the lamplighter and so improving his productivity.

I'm not sure whether burst gas mantles were exchanged by the lamplighter 'on the fly' or were noted for later daylight replacement.

Poem about a lamplighter

This poem is a child's view of a lamplighter who he called Leerie which I understand was a common name for a lamplighter, particularly in Scotland. It was brought to my attention by Marilyn Davis.


My tea is nearly ready and the sun has left the sky
It's time to take the window to see Leerie going by
For every night at tea-time and before you take your seat
With lantern and with ladder he comes posting up the street.

Now Tom would be a driver and Marin go to sea
And my Papa's a banker and as rich as he can be
But I, when I am stronger and can choose what I'm to do
O Leerie, I'll go round at night and light the lamps with you.

For we are very lucky, with a lamp before the door
And Leerie stops to light it as he lights so many more
And O! before you hurry by with ladder and with light
O Leerie, see a little child and nod to him tonight.

Robert Louis Stevenson
'The Lamplighter' in
A Child's Garden of Verses