How ordinary people used to bath in Victorian houses

In the early 1900s when I was a child growing up on the Victorian housing estate, it was a matter of principle that we all - adults too and children - were kept clean.

Bathing for adults -The 'bathroom' and hard work

Generally adults didn't bath. They just had a good wash down at the scullery sink. This was even though there was, in fact, a full-sized bath in the house. It was upstairs inside a large cupboard in a small room which was called the off-room - and which in later years had the grand name of bathroom - see the floor plan.

For practical reasons this bath was hardly ever used because of it having no running water. 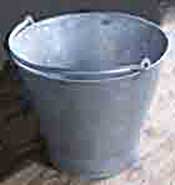 Galvanised tin bucket, as used for filling a copper and carrying hot water from the copper to the bath. Photographed in Fagans Museum of Welsh Life.

If someone wanted the luxury of a bath, they had to work for it. They first had to fill the copper in the scullery with water, then light the copper fire, which incidentally could be very temperamental. Then, once the water was hot, they had to ladle it into a bucket and carry it upstairs. A bath took a number of bucketsful and was never filled very deeply. The full buckets were heavy and it was all too easy to spill the hot water and scald oneself.

After the bath, the used water had to be ladled out into buckets and carried downstairs.

No wonder the public baths were so popular.

It was standard practice for children to be bathed on Saturday nights in a tin bath in front of the open coal fire in the kitchen. The kitchen was effectively our living room and it always felt cosy. 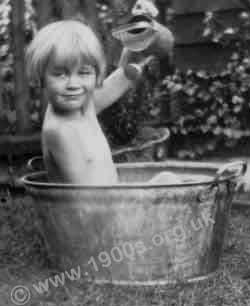 A relative playing in a tin bath in the 1930s. A winter bath for children would look like this but in front of a coal fired kitchen range.

Bathing us children was - like everything else for my mother - hard work. Because there was no running hot water anywhere on the Victorian housing estate, bathing necessitated lighting the fire of the copper well in advance and then pouring buckets of cold water into it to heat up.

Then, when the water was hot, it had to be ladled out of the copper into buckets and carried to the tin bath in the kitchen.

We children bathed one at a time in the same water. The soap was ordinary household soap.

We had our hair washed while sitting in the bath. Our hair was lathered with the household soap and then rinsed with a jug of hot water poured over our heads. There wasn't time to say, "Ouch, it's too hot" or, "Ooooh, it's cold!".

Preserving our dignity as we grew older

As bathing took place in front of the kitchen range, everybody except the bather had to stay out of the parlour for the duration.


Spiders in the bath

Because the bath spent the rest of the week outside in the yard, it had to be cleared of spiders and spiders' webs, etc. before we had our bath.

Just as the bath had to be filled by bailing, it also had to be emptied by ladling. Any attempt to move these baths while water was in them would be a mistake because even the slightest of movements created a wave which could flood the floor.

After children were bathed: clean clothes and more

We children always had our clean night clothes put on after our baths, followed by a dose of brimstone and treacle, which was rather ridiculous as it made me feel sick and, if I was, I risked dirtying my clean nightdress which my mother had gone to so much effort to wash and iron earlier in the week. Brimstone and treacle was a laxative, which, it was considered, was always necessary for children once a week.

Sometimes after our bath my mother would you read to us. I only remember two books Peep behind the scenes and Cast your bread upon the waters. The first book was about circus life where a little girl called Rosaly lived with her mother in a caravan. The mother was very ill with consumption and little Rosaly had to perform in a circus every night. I think the reason for me to remember this so well was because I was fascinated with the little girl's dress which was a typical circus dress, it had a tight bodice and a billowing white skirt with red roses round at the bottom. Actually it was a very sad story. The other book, I suspect had a moral to it and was based on the proverb, Cast your bread upon the waters and ye shall find it to returned after many days. It left no lasting impact on me.