The back yard and back garden on Victorian housing estates

Like most back gardens on Victorian terraced housing estates, our back garden was reached through the back door in the scullery. First, though, came the back yard.

The area just outside the door was known as the 'yard' and was laid out in dark blue and dull red tiles. My mother's mangle was kept there with a sheet of tarpaulin thrown over to protect it from the weather.

The various tin baths used on washdays and for Saturday bath nights were kept there too, hung from hooks on the wall or fence. 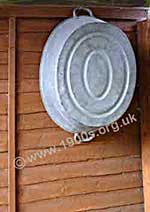 Our food safe, also known as the 'meat safe', was also there, opposite the back door for easy access. Being outside in the shade it was the coldest and most airy place available and was used for perishable food like meat, milk and butter.

Round and along the garden path and shed

The red and blue tiled path led round to the back of the house to my father's shed which was a lean-to which he had built himself. The path also led through the lean-to to the outside lavatory.

My father's shed had a good working bench and vice. It was well kept and well stocked with tools. The hobbing foot was also kept there to repair shoes - or should I say boots, as that was what we all wore, apart from on Sundays and special occasions. It was cheaper for my father to mend our boots himself than for us to use a cobbler, known as the 'snobs'.

Along the path, away from the house, was the back garden.

The back garden was very well kept with beautiful flowers. Flowers like clothes seem to go by fashion.

We felt that the back garden was a good size, but the size must have varied in more urban or rural areas, even though the house design would have been broadly similar.

In our back garden there were ageratum, phlox, tobacco plants, zinnias, heliotropes, asters, roses, pinks and many other old varieties.

Householder usually grew vegetables as well as flowers, but men with large families generally had allotments as well,

Where the manure came from

The soil was in good condition thanks to my brothers and me, who had to go out with a wheelbarrow, brush and shovel, and collect horse dung from the road as manure. There was quite a lot of it because horses were effectively the only means of transport and no-one thought it at all odd for them to leave their dung on the road. My father put the dung that we collected into a large tin bath and watered it down. Runner beans seemed to do particularly well with this watery manure. My brothers and I never quarrelled about the chore. In those days when you were told to do a job, you just did it, no questions asked.