Mending boots at shoes at home: tools and method

When I was a child in the early 1900s, all ordinary people wore boots, apart from on Sundays and special occasions when we did have shoes. 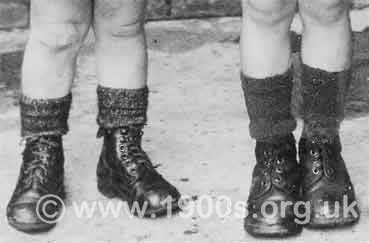 In very poor families, children often went barefoot, and there would be collections of cast-off shoes for them.

Why men mended their family's boots and shoes

My father, like most working class fathers at the time, saved money by repairing our family's boots and shoes himself, in his shed outside in the back garden of our Edwardian terraced house. It was cheaper for him to do it rather than to use a local 'cobbler' [shoe mender].

When boots and shoes were ready for mending

My father always seemed ready to repair my boots once he knew that they needed it, but he usually did not know. I well remember him asking to look at my feet, and lo and behold! There was a hole in the sole of my foot. There was a lot of "tut-tutting" and "Didn't you know there was a nail sticking up?". Of course I did, but one did not readily complain in my childhood.

My father mended our shoes with leather. He cut a piece just larger than needed and soaked it in water to soften it and make it more pliable.

Tools for boot mending and how they were used

My father had his own hobbing foot. This was a length of wood about 6 inches in diameter and about three feet high with a hole in the top to hold a piece of metal in the shape of foot. This was called a 'last'. There is more on the difference between a last and a hobbing foot on the page on cobblers. 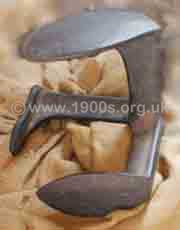 A form of last, suitable for using with a range of shoe sizes.

Hobbing foot, back left, surrounded by lasts of various sizes.

There were three sizes of last: men's, women's, and children's.

His other tools and implements were a bradawl for making holes, a hammer and nails and a very sharp knife for cutting the leather to shape.

Different tools for stitching or nailing the new leather soles

The bradawl was used for making holes if the soles were to be stitched on. Then pitch tar would be used for sealing.

For nailing on soles, a main would have to have the special pincers used by cobblers. These had sharp jaws for getting a grip on headless nails. At the end of one handle was a nail puller and at the end of the other a small ball for hitting with a hammer to punch the nail heads below the level of the leather to avoid getting worn through - see my sketch below.


How the tools were used when mending boots and shoes

When my father had a boot or shoe to repair, he chose the best size of last, put it onto the hobbing foot and then put the boot or shoe on top of that. Finally he placed the whole contraption between his legs, and sat down using his knees to support it. He would have looked rather like the main in the following drawing.

A man in the early 1900s mending a boot, from a sketch provided by Rosemary Hampton

More about the sketch

Not shown is the loop of string or leather that went over the arch of the boot and under one of his feet to hold it in place, so freeing both hte man's hands. One hand positioned the nails which were stored in his mouth and the other used the hammer.

Then my father took the worn leather off the shoes, nailed on the new leather and cut it neatly to shape with his sharp knife.

There was also some black stuff [pitch tar] that he put round the outside of the sole, which he finished off with a small, hot tool. I think this was for waterproofing.

Finally he polished the boots and shoes with a hard beeswax polish, sold specially for the purpose.