Keeping moths out of woollen clothes in the early 1900s 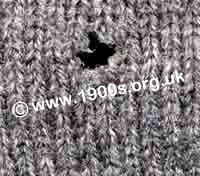 A moth hole in a knitted woollen garment

When I was a child in the early 1900s, the clothes of working-class people were either made of wool, cotton or linen. There were no synthetic fabrics. So there was a lot of wool around. There were problems with wool though. One was that it shrunk when it was washed - so it wasn't washed very often. The other was that there was a special type of moth, known as a clothes moth, that attacked it. This moth was quite different from the ordinary moths that one sees around, and there were a lot of them because there was so much wool.

The effects of the clothes moth

The attacks were most troublesome on clothes that had been lying unused, ie put away in store for a while, like winter clothes over summer. The moth found them and ate little holes into them. Then when people got their clothes out to use, they found them spoilt. The phrase was that, "the moth had got into them" or "they've got the moth". The holes could of course be darned, and they usually were, but the darning never looked quite like the original fabric. As most children wore hand-me-downs, it was quite common for their clothes to show patches of darning.

The best prevention of moth damage - which was only partially successful - was to store clothes with what were known as 'moth balls'. 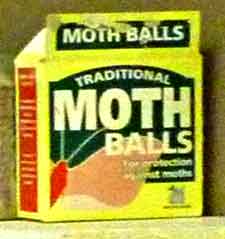 A packet of moth balls - or rather, a packet which once contained moth balls. Photographed in Swansea Bay Museum. 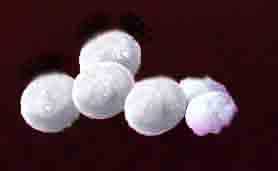 A computer-generated picture of moth balls because I have not been able to find any as they evaporate away.

Can you supply a genuine photo?

Moth balls were white semi-translucent balls about the size of marbles made of a pungent, somewhat crushable substance called napthalene which had its own unique smell and was said to put off moths. It probably worked, but moth balls evaporated, which was why they smelled so strongly, so you had to make sure that you used enough of them frequently. They were spread evenly in the drawer or cupboard; and you had to were quick off the mark to replace them before they had evaporated.

Otherwise the moth came back and ate into the clothes. It of course fell to the women to buy the moth balls, but the task of spreading them was often given to us children.

The ever-present smell of moth balls

The smell of moth balls was common because everyone used them, and it stayed in clothes. You could often smell when someone was passing by without even looking up.

The demise of the clothes moth

With the development of synthetic fibres, and their popularity over wool, the clothes moth has had less to feed on and has largely disappeared. However it has not gone completely, and you may still find unexpected little holes in your woollen clothes.