Cleaning in working class houses in the 1900s

Laying the dust before sweeping

The floor covering in most of the rooms on the Victorian-style houses on our housing estate was called oilcloth. My mother swept it with a broom to remove the surface dirt, but sometimes she squeezed the used tea leaves almost dry and sprinkled them over the floor first to settle the dust. This was called 'laying the dust'.

Washing and scrubbing the floor

My mother washed the oil cloth on her hands and knees using a scrubbing brush and soapy water. 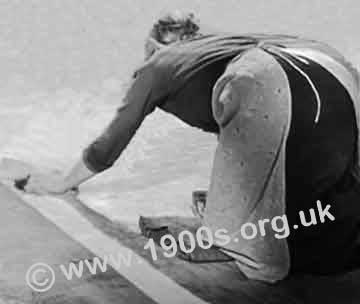 Woman scrubbing on her hands and knees.

The soap, soda and scrubbing brush

The scrubbing brush was bristle set in a wooden handle. The soap was, as always, Sunlight carbolic soap - the same block that we used to wash ourselves. The water was softened with a few crystals of washing soda, as water where we lived in Edmonton was hard. The hot water came from the copper in the scullery or from a kettle over the kitchener fire.

Sunlight carbolic soap, known as 'household soap' used with hot water and washing soda before the age of detergents.

There is nothing in my mother's recollections about dusting. As her own mother must have done it, my mother may have felt that the process was no different to how women dusted in the 1980s when she wrote her recollections. She certainly mentions her mother using a duster in another context. If you can add any information, please let me know.

There were no such things as vacuum cleaners and few had heard of a mechanical carpet cleaner which later became known in the UK as a Ewbank. All the cleaning was done by hand with a carpet brush.

In good weather rugs were cleaned by hanging them on the washing line to let the sun and wind get at them. Sometimes they had a more thorough clean by being beaten while on the line. There were special cane carpet beaters sold specially for the purpose. Clouds of dust came out this way. 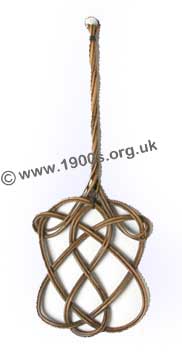 Cleaning rugs in the snow

In the winter, the rugs were given an extra clean by dragging them over the snow, just quickly enough for them not to get too wet. In the early 1900s when I was a child, it seemed that you could always rely on several snowfalls every winter.

Just imagine what a cold job this must have been.

There were no curtains at windows, only the wooden Venetian blinds.

Wooden venetian blinds at windows in the early 1900s

The venetian blinds were made of wooden slats which were heavy and rigid So when they were washed, each slat had to be removed separately and washed individually. The copper would seldom have been lit specially, so it was a job which had to be fitted round other jobs that needed hot water, like the Monday wash. Once washed, the slats had to be dried and polished with a clean duster, then replaced into the cords.

Like so much of the other cleaning, washing up was done with hot water, Sunlight soap and a few soda crystals in an enamel bowl. The soda prevented scum forming, but the cups and forks in particular needed a good rinse to wash off the soda, which had a horrible taste.

The washing up was done at the scullery sink. There was a wooden draining board and a wooden plate rack.

There were no non-stick saucepans or cooking pots and no rubber gloves. Women used dishcloths and wire-wool for washing up.

My mother does not say where the hot water came from on hot summer days when it would have been unbearable to light a fire. According to Anne Davey who was evacuated in World War Two, the hot water in the summers of the 1940s came from a primus stove.

Can you imagine what women's hands must have been like with all this washing?