Household kettles through the 20th century

In the early 1900s, according to my mother's recollections, the coal-fired copper was lit once a week to heat water for the weekly wash. All the other hot water of the household - whether for hot drinks, personal washing or keeping the house clean - came from the kettle. This meant that kettles needed to be quite large. The kettle was heated on the coal-fired range whenever hot water was required and kept on a trivet close to the range or hung from a swing arm above it at other times, so keeping the water warm. 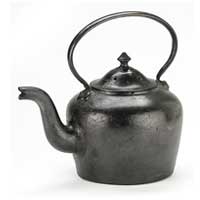 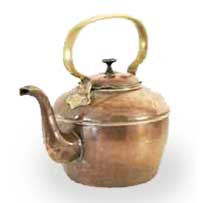 In ordinary working class households, the kettles were made of cast-iron or enamel. In the more well-to-do households they were copper. Being metal, the handles got hot. So usually they were held through a folded cloth. Alternatively or additionally, string was wound round them or they were made of wood. Although I was born years after their heyday, I do remember seeing a few string-wound handles and can report that the string got very tatty, particularly as it was so often wet.

Kettles filled through their lids that lifted off. 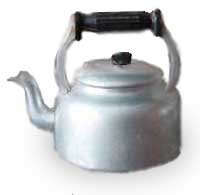 Aluminium kettle with a Bakelite handle

I grew up in the 1940s and 1950s, by which time gas ovens and electric ovens had taken over from the old kitchen ranges. These had hobs on top - although I never heard that word used at the time. My parents had a gas oven and our kettle stayed out on its 'hob'.

We had only one kettle throughout my childhood and teenage years. It lasted! It was a simple plain aluminium one that was rather large. In fact it was unnecessarily large which I suppose was a hangover from what my mother was used to from her childhood when so much of the hot water was heated in the kettle. Our hot water came from a coal-fired boiler, so we seldom had to use the kettle for anything other than drinks. This meant that the kettle was seldom more than half full. It filled through the lid that lifted off. For all the time I ever knew, it was caked inside with flaking lime scale. A black Bakelite handle meant that it was never too hot to hold. The knob on the lid was also Bakelite.

The only way to tell how full the kettle was was to look inside or judge its weight.

The kettle heated directly on the naked flame of a gas ring of the 'hob' of the gas oven. Similar kettles with thicker ground bases were available for the hobs of electric ovens.

As the kettle heated it gave off a sound, described as 'singing', and you could tell without watching when it was boiling because the singing would suddenly go quiet. At the same time, steam (actually water vapour) appeared out of the spout.

There was always the danger of being called away to the front door or to a child crying and forgetting that the kettle was on. It could then boil dry and burn its bottom out. This was a well-known problem, although it never happened in our house. 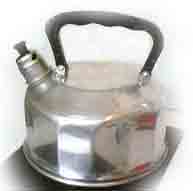 Some kettles in friend's houses had detachable whistles that fitted over their spouts and gave a whistling alarm when the water was boiling. However as the whistles had to be taken off for filling, two hands were needed - one to hold the handle and the other to take off the whistle, put it down, turn on and off the tap and replace the whistle.

These kettles were common, but they were fiddly and it was all too easy to forget momentarily where one had put down the whistle. The whistles fitted into the spouts of the kettles by friction, and I found them rather stiff and fiddly to use.

Some households had similar kettles that heated with an electric element inside, but they were not common. Those I saw were badly designed because the heating element was large and in the middle of the kettle so that the kettle had to be filled up to ensure that the element was covered. This was wasteful. 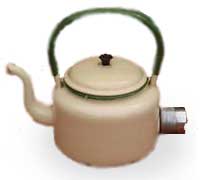 Such kettles were unattractive because their plugs and sockets were large and their leads were invariably dark.

It was not until the late 1950s that a different type of whistling kettle came into the shops. Its whistle was integrated into its spout. These types of kettle were very popular indeed, although my mother, who did not like change, kept her old kettle.

Nevertheless when my husband and I set up home in the early 1960s, we considered ourselves very modern and fashionable to have a shiny whistling kettle. Its visible parts - apart from the handle - were stainless steel, but it had a copper bottom to conduct the heat. 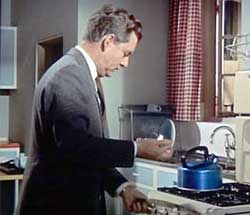 Lighting the gas under a blue anodised whistling kettle. Screenshot from an old film 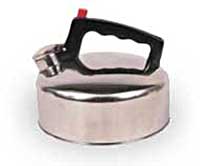 
This type of kettle filled through its wide spout which opened with a lever action from a button on the handle. The button could be pressed with the thumb while holding the kettle's handle. Consequently the kettle had the advantage that it could be used with one hand while turning on a tap or holding a cup with the other hand.

For as long as the kettle boiled and there was water in it to boil, the steam kept the whistle blowing.

This kettle was boiled on the 'hob' of the gas oven. There were several variations. In particular they came in coloured anodised aluminium as well as stainless steel and with heavy ground bases for use on an electric oven.

Sometime later or possibly around the same time, electric whistling kettles of a similar style came on the market. I wouldn't have one for several reasons: They had to be unplugged and plugged back in every time the kettle was taken to the tap; and they had to be kept out on a kitchen surface all the time with their ugly dark leads permanently showing. However, they were popular. It was just that I disliked clutter.

Only very much later did electric kettles with thermostats arrive to turn themselves off when the water reached boiling point. Then whistling kettles became redundant. 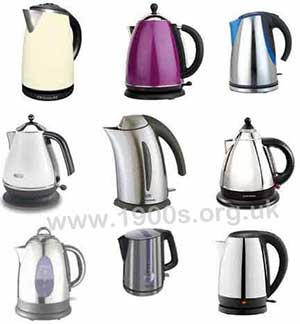 With the continuing development of heatproof plastics, electric kettles became designer-ware and were normally shaped as jugs with gauges to show how full they were. More attractive white plastic-covered leads became the norm and the connection to the electricity was arranged in the base so that the kettles simply lifted on and off, making them more readily portable.

Jug kettles were and are practical and easy to use. On the negative side, though, they do seem to need replacing every few years.

The range of jug kettles is vast and there is no shortage of photographs of them on the internet.