My mother told me that one of her grandmothers lived in little more than a hovel and cooked on an open fire. She even had to use a candle at night to see if water in the kettle was boiling.

The fuel in the open fire: coal versus wood

People who could afford it would buy coal to burn in their fires because it burnt at a higher temperature and for longer than wood. However, families living in old, rural, unmodernised houses were usually poor, and wood was readily available as fire wood, free of charge in the open countryside. So many a fire would use wood.

Open fire cooking is most suitable for meals that require long slow cooking on a fairly low temperature. The people who lived in these old cottages tended to be poor. So their food was probably mainly stews of seasonal vegetables, with the occasional home-reared chicken or trapped wild rabbit or pigeon.

Wealthier people were probably more adventurous in what they could eat. They either had kitchen ranges or very large open fires that blazed with so much heat that no one but servants would go near them.

How the heat was adjusted for cooking on an open fire

The simple and obvious way to adjust the heat for cooking

Building up a fire with more wood or coal is the obvious way of increasing the heat and limiting the air supply with a covering of loose fuel the straightforward ways of reducing the heat. That process was described as 'banking up the fire'. People normally did it to save fuel just before going to bed at night when they no longer needed a warm sitting area. In the morning there was usually enough heat inside the fire for it to burst back into flames given a good poke with a poker to let the air in.

However this method was not sensitive enough for cooking.

The heat from an open fire under cooking pots could be adjusted quite quickly with a cast iron device attached to the fire. It was widely used in the past. The process is best explained through the following pictures. 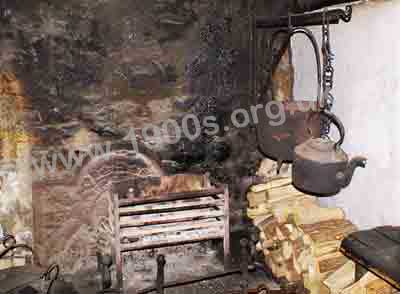 A cast iron device for heating cooking pots over an open fire. The height above the fire - and hence the cooking temperature - could be adjusted by the altering the lengths of the suspension chains.

There were various versions of the device, but the principle was the same. 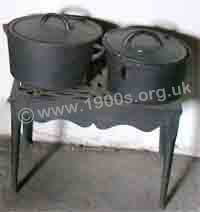