The kitchen fire in Victorian and Edwardian times

Why a fire in a kitchen?

As explained on other pages, the kitchen was where we lived and the scullery was where the main cooking took place.

Yet some small-scale cooking did take place in the kitchen, and the kitchen fire doubled as a welcoming fire which was burning in all but the hottest of summers and a small version of the scullery's larger kitchen range.

Also heating of some sort was essential in the room where we lived, which was the kitchen, and coal was our only form of heating. Hence the kitchen fire. That it doubled as a small-scale kitchen range was an added bonus. 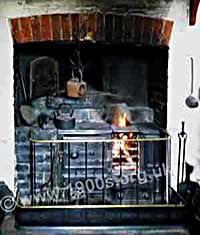 So far, the best picture I have of the fire that would have been in old working class kitchens. Note the substantial fitted fireguard*.

Pots could be boiled on its hob and it had a small oven beside the open fire. Many a tasty meal has come out of such ovens and they were well-used.

Also the kitchen fire was used for heating the irons for ironing because it had a pull-down tray in front of the fire on which the irons could be stood while heating.

Consequently the larger kitchen range in the scullery was seldom lit. However it was common for some families to have nine or ten children, and they would have had to use their larger range.

Kitchen ovens had an excellent safety record. Note the high metal fireguard which was always in place other than for cooking and attending to the oven.

The work involved with a kitchen fire

There was always a lot of work with the kitchen fire, but there was no alternative. The page on a later coal fires elaborates on the work involved and applies equally to old-style kitchen fires.

Additionally my mother kept our kitchen fire beautifully clean with black lead - a polish for cleaning and polishing cast iron. The outer rims were steel and were always kept bright with emery paper. The fact that these rims are not obviously shiny in the photo or in the photos of larger kitchen ranges is almost certainly because no-one cleans them any more.

The smell of a kitchen fire

One smell associated with the kitchen fire was that of cooking, but there was another which was far from pleasant. This smell was of wet outdoor clothes being hung over the fire guard to dry. (The fire guard was substantial enough to take the clothes, as explained in the page on drying washing on wet washdays.)

In those days there were no such things as mackintoshes and, if it rained hard on our way home from school at dinnertime (lunch), we really had a soaking. So our coats had to be dried quickly for us to get back to school by 2 o'clock.

The smell that came from these wet clothes was quite revolting. There were no dry-cleaners and no man-made fabrics, and the clothes had been about for years, having been passed down from one set of children to another. Woollen clothes were seldom if ever washed because wool always shrunk, often unevenly, making the clothes too misshapen for use. Dirty marks were merely sponged off.

It's strange how some smells affect us. They seem to disgust and yet fascinate. African marigolds have the effect on me, as do moth balls.

*Photographed by the webmaster in Milton Keynes Museum