This page is based on recollections and notes by my mother, 1906-2002 who attended Silver Street School in north London. There are considerable additions from former pupils along with my own research. 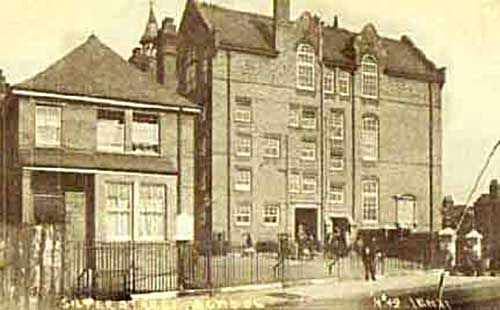 Silver Street School in Edmonton, planned and built in the last years of Queen Victoria's reign and therefore incorporating what was then the latest thinking on how large schools should be built.

Plaque commemorating the opening of Silver Street School in 1901, and showing details of the Middlesex county crest. courtesy of John Cunningham. Tap/click for a larger, legible image.

After some years being planned and built, Silver Street School opened for pupils in 1901, almost certainly to coincide with the surge of new housing on the Huxley estate.

The plaque commemorating the opening is still displayed today - see the photo.

The location of Silver Street

In those days, Silver Street was the A 406, The North Circular Road. It was the main road around north London and the main route from the northern Home Counties to the London docks and Dover.

Design of the school inside

The school was designed to aid the segregation of boys and girls as described on the page about the school system. It therefore had three floors one for boys, another for girls and another for mixed infants.

There was a school hall and a staff room. The classrooms have their own page. 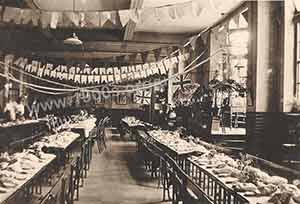 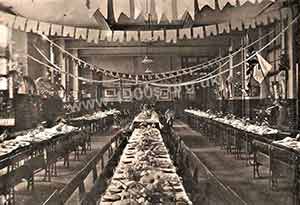 These two photos are of the school hall in the early years of the 20th century. It is difficult to believe that the elaborate table decorations are for the children. The hall is probably to be used for some civic event, it being the largest in Edmonton, but unfortunately even the original does not show details of the table decorations. The photo is courtesy of Simon Benbow.

Features in the school grounds: the playgrounds

In line with the policy of segregation, there were two playgrounds which effectively separated the older boys from the girls and the younger children.

The lavatories consisted of about eight cubicles in a their own building outside the main school. It had the sewage pipe going the whole length. The lavatories didn't flush: they had to be flushed out all together from time to time with buckets of water, and this was another job for the school caretaker.

My mother left no recollections of how segregation was handled in the lavatories. There was probably a separate lavatory building for the boys. Frank Clarke elaborates below:

Even as late as the 1930s when I was at the school, there were no toilets in the building and it was necessary to make the long trip down the stairs and up toward the end of the playground to the "Karzy" as it was affectionately known.

There was a fairly small field which later enabled the school to expand. The end of the field was turned into an allotment during the 1914-18 war, and worked by the boys.

The cycle shed and the bicycles 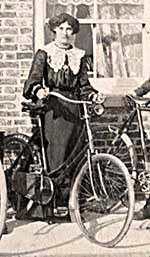 The children all lived within walking distance of the school, but there was a cycle shed for the teachers as they mostly arrived by bicycle.

My mother wrote that she liked to think back to the teachers. No cocking a leg or dashing along for them. The women would cycle along at a dignified pace with their cycle baskets on the handlebars in front of them.

The headmaster would get on to his bike elegantly by stepping onto a little bit of metal on the middle of the back wheel to raise himself onto the saddle. He was a well built, grey headed, imposing man who looked as though he was in command of any situation.

A new school for girls was opened in 1931 and the older girls joined it and left Silver Street School. The new school was called Hazelbury School, but probably similar schools were opening elsewhere.

There were no older girls in Silver Street School in my time (the mid 1930s). They were transferred to Hazelbury Road School when it opened in 1931, which was no doubt tied in with the building of the council estates in Edmonton. So, although the doorway marked Girls would have been used by girls before 1931, it was afterwards for the junior boys (aged 7 to 11).

The top floor could be accessed through the Juniors entrance but the older boys (aged 11 to 14) had the separate main gate playground and stairway at the far end of the building.

When, as a junior boy, I was late for school, I would (illegally) go in the Seniors gate, run to the far end and use its stairway to the second floor. As there was no monitor there to catch latecomers, I could look as if I was coming back from the toilets after assembly.

I was at Silver Street School in the late 1930s. Then the school was divided into three. The lower floor was known as the Infants which was for boys and girls. The second floor for the Junior Boys and the top floor for the Senior Boys.

Note that Frank Clarke's recollections show the then terminology for the usage of the three floors.

When my sister and I started Silver Street School, she in 1948 and I a year later, the ground floor was for infants and it was mixed boys and girls, the first floor was primary and the second floor secondary - also known as juniors and seniors respectively. These two floors were all boys because Hazelbury School for girls had opened in 1931. By the time my brother started school in 1954, Firs Farm Infant school had opened, and the first floor of Silver Street School became primary and the other two floors secondary. If you passed the 11 plus you went to one of the grammar schools in the area, but if you failed, you went to a secondary school like Silver Street until 15 and then went to work. Sometime in the 1950s the name was changed to Huxley County Secondary School, and RSA exams (Royal Society of Arts I suppose) exams were introduced. They were a sort of downgraded version of O level GCE so you could actually leave school with some kind of certificate.

The closure of Silver Street School

The first photo of Silver Street School is around 1910 and is from an old postcard, courtesy of Cliff Raven. The caretaker's house is on the left. Note the two doorways which were the infants' and girls' entrances and the separate gateway leading to the boys' playground with its boys' entrance at the other end. Also note the three storeys and the bell tower (back middle left) housing the bell which called the children to school.

The second photo is more recent photo and was taken by Cliff Raven in 2005. The building has changed remarkably little. The bell tower has gone, what was the caretaker's house has benefited from replacement windows; and two trees have matured.

The following pictures show what I remember from the bus in my 1940s childhood when we visited relations in Edmonton. 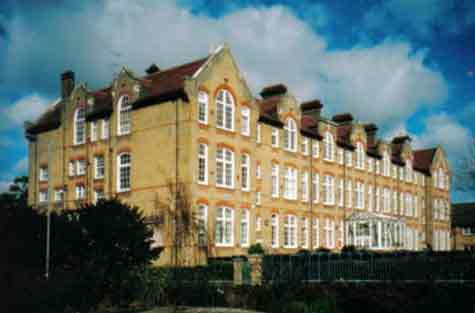 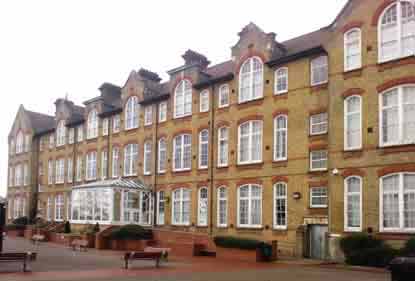 Views of the side of what was Silver Street School, taken further along Silver Street by Cliff Raven in 2005. He reports that the appearance of the building from this viewpoint is almost entirely unchanged from the early 1900s. Exceptions include the conservatory addition which went up when a new roof was put on in the 1970s. The bell tower was removed at the same time, and the building was given a sandblast clean.

Photos of the pupils and teachers show parts of the school building as backgrounds, particularly the school hall with its parquet floor and gas lamps, and an original raked classroom.

In the main hall was a glass case containing a small African spear. It was given to me by my uncle who served in Africa during the WW2, and I gave it to the school around 1946.

The earliest memorabilia I have of Silver Street School, courtesy of Graham Hogg. This prize, the book 'The Swiss Family Robinson' was awarded to his father Robert Hogg in 1909. On the right is a thumbnail of the inscription on the inside cover. Tap/click here for an enlargement. 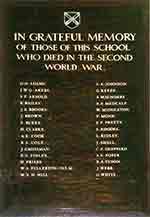 Plaque displayed in the Aylward School, now the Aylward Academy, the successor to Silver Street School, commemorating ex-pupils who died during the Second World War. The photo was supplied by Andrew Dickson. His cousin Jim Brown from the Fleet Air Arm is commemorated. He was 19 when he died.

The plaque also commemorates my uncle, Horace Clarke. I was too young to remember him but he was often talked about in the Clarke household of my father which suffered so badly in the Second World War blitz of Edmonton.

The R. S. Cole named on the plaque was no relation of my mother's family.


Children who attended Silver Street School over the years

There are numerous class photos from Silver Street School from which you may be able to recognise someone you know. Start.