The Christmas letter home from school, 1903

On another page is a 1915 Christmas letter home from a day-boy at Silver Street School. I felt that one of its main purposes seemed to be to encourage parents to canvas for the teachers to be freed from enrolling in the armed forces during the First World War.

However, I may have been unfair in that an earlier Christmas letter home, written before the war in 1903 - see below - has also come to light from a boy at the school. So whereas two letters hardly make a tradition, it does seem likely that a Christmas or end of term letter home was not unusual. 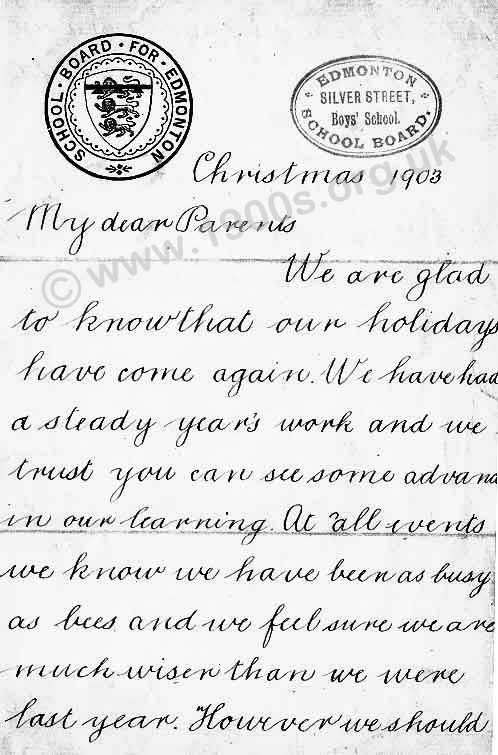 Page 1 of a Christmas letter home from school, 1903, courtesy of David Smith 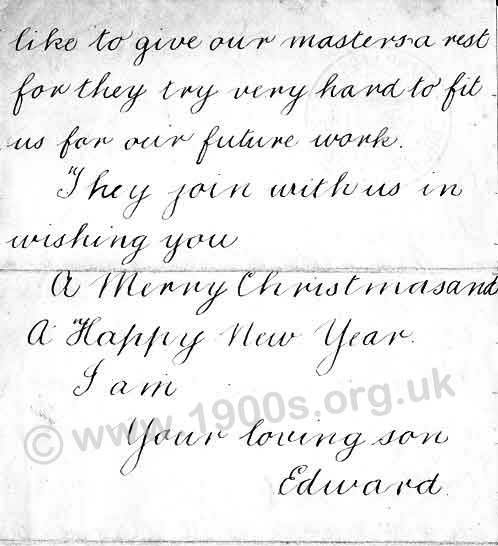 Page 2 of the Christmas letter home from school, 1903, courtesy of David Smith


The letter was probably copied from the blackboard. It does not give any hint as to the age of the Edward who wrote it, but, whatever this age, his writing cannot be faulted. Certainly his parents must have been impressed. He would certainly have been younger that 14, as ordinary working class children left school then.

It is worth noting though that this letter, like the 1915 one finds a place for praising the teachers, who, as was normal at the time, were referred to as 'masters'.

Somewhat surprisingly, in my view, the pupils were provided with headed notepaper from the School Board for Edmonton. It would have been expensive with replacement sheets if any of the boys had made mistakes. At the top right appears to be a rubber stamp, presumably to show that the letter had been checked as suitable for going out.

Even the envelope provides information about life at the time: 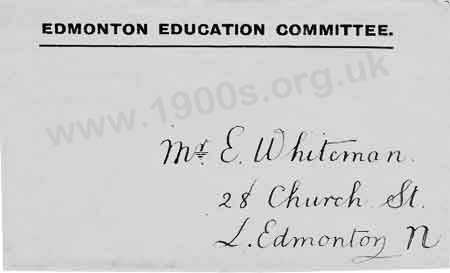 Envelope of a Christmas letter home from school, 1903, courtesy of David Smith

Note also the postcode. Postcodes have become much more complex over the years. Here in 1903, the Edmonton postcode was just N; while I was growing up in the 1940s it was N18. I don't know what it is now but it is almost certainly six characters or so.

There was no stamp on the envelope which means that the boys were trusted to hand over their letters to their parents - not that there was anything judgemental in them.