How writing was taught in Victorian and Edwardian schools

This group of pages is based on childhood recollections of Silver Street School, Edmonton which was built in 1900 to earlier Victorian specifications.

One of my earliest memories of school in the early 1900s was being given a tray of sand to write out my letters with my finger. It had the advantage that there was no serious rubbing out to do. To start afresh, we children only had to shake the tray.

Later came slate and a 'slate' pencil, which made a horrible scratching noise and was very dirty because we would spit on the slate to rub bits out with our fingers.

What were slate pencils made of?

I have been unable to confirm what the slate pencils were made of. The most likely information on the internet suggests that they were of a soft slate composition or soap stone. The writing on the slate came out white.

Lined slate from the early 1900s to help children keep their writing straight. The other side is plain, unlined. Also the special pencil for use with the slate.

A folding children's slate labelled as made in Germany for the English market, 1910.

Later we had chalks which seemed to me to be even more trouble than slate.

This was because I, like most girls, wore a pinafore over my dress. Pinafores were white cotton and sleeveless with frills round the armholes. Some were embroidered, some had a ribbon threaded through them and were very pretty. I think that the advantage of them was supposed to be that they could take high temperature washing, like boiling in the copper. However, the disadvantage was that they showed the slightest mark and laundry was harder work than anyone of today could possibly imagine. One day I got my pinafore in an awful mess at school with the chalks, and I was afraid to go home. 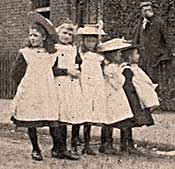 Girls wearing the white over-pinafores that so easily got dirty with the chalk used for learning to write. Photo courtesy of Gwen Nelson.

The girl who lived next door and was much older than me found me crying. She took me home and went in to my mother with me.

Later still came pens with nibs which had to be repeatedly dipped in ink with the consequent drips.

Part of a letter written with a pen that had to have its nib continually dipped into ink.

'Pencil' boxes for pens and pencils, all wood.

The nibs often got twisted and had to be replaced. A damaged nib could be eased out of the pen holder and a new one inserted. If a wider pen stroke was required, the nib could similarly be eased out and replaced with one of a different stroke thickness.

Each child's desk had an inkpot made of white china which was set into a specially made hole. These can be seen at the far right of desks on the classrooms page. Ink pots were filled each week by children who the teacher designated as class monitors. One of the pictures shows how the writing is dark after the nib has just been dipped into the ink and fades off until the nib is next dipped in. Note that the ink is blue, which was standard in the 1940s and 50s, and probably before.

The ink never seemed to stay where it was supposed to. Somehow it always travelled up our second fingers and we had to be very careful indeed not to get blots onto our clothes or our exercise books, which was very frowned upon.

Reproduction Victorian and Edwardian school writing tools - as displayed in the museum shop at the Museum of Reading - bottles of ink, china ink pots. pens with replaceable nibs, writing slates with slate pencils.

It would not be advisable to use the ink pots without first securing them in the hole of a classroom desk as they would easily get knocked over, and ink stains badly.


Fun and games with pen nibs

I used to break the nibs to make them into twin pointed flightless darts. This must have been a common practice in schools, as an old friend from The Latymer tells me that he also used to make the nib darts. He even fitted them with paper flights. The target was usually the underside of the lid of classroom desks.

Learning to write in the 1940s

I was also taught to write with nib pens in the 1940s. Later we graduated to fountain pens which stored ink, so didn't need to be repeatedly dipped in an inkwell. Ball point pens were strenuously disallowed on the grounds that they ruined handwriting.

Photographs by the webmaster with acknowledgements to Anne Davey, Salisbury Museum and Tilford Rural Life Centre