Classrooms in Victorian and Edwardian schools

In the early 1900s when I was at school, the average number of children in a class was 60.

In spite of the large classes, the teacher could easily see the pupils at the back of the class because the room was tiered - or 'raked' like a lecture theatre. On another page is an expandable image of a later mixed sex tiered classroom. 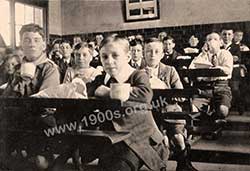 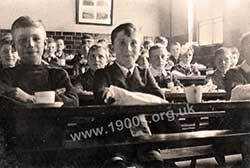 Both the above photos are courtesy of Simon Binbow, from his grandfather's time as a school teacher at Silver Street School in the early 20th century. Note an all-boys class.

The teacher sat at a specially high desk which had its own high chair, so that she could look out over the whole of the class. I say 'she' because girls and boys were taught separately, the boys by men teachers and we girls by women teachers.

Incientally, all the women teachers were spinsters. Marriage was regarded as a full-time commitment; so when a woman teacher married, she had to give up teaching. All that changed during the wars when women had to take on the jobs of the men who were overseas fighting at the front. 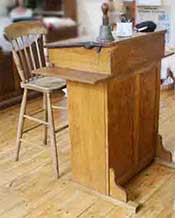 Teacher's high desk and high chair as used in schools in Victorian times and into the 1940s or later.

Teachers seldom walked around. They generally spoke while sitting at the high desk. In the photo, note the hand bell on the desk for getting the children's attention.

When the teacher wanted to show us something, like letters to copy or sums to do, she wrote with chalk on a large blackboard, supported on a wooden easel which could be moved around if necessary. 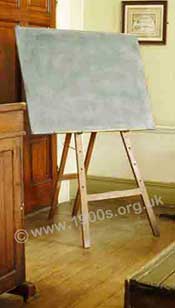 As the floors were tiered we could easily see the board from the back of the classroom.

When the teacher had finished with the blackboard or needed more space, one of the children would be told to clean it with a duster. Fortunately it cleaned easily because the dry chalk just rubbed off. With a lot of writing or a dirty duster, though, there could be quite a cloud of chalk dust which got up our noses if we were sitting near the front.

When we started school, we small children sat on benches, but in later years we were supplied with desks.

School desks were essentially the same country-wide. The main differences between them were their size; whether they were singles or in pairs; and whether they had seats attached. 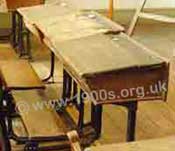 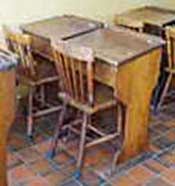 A classroom desk closed for use as a working surface. Note the indent along the top, by the inkwell for pens and pencils. 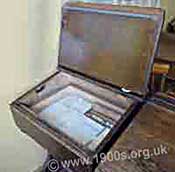 An open classroom desk, showing the space for a child to keep personal items.

For the younger classes, the desk seats were flat planks of wood which were attached to the body of the desk and on some desks they folded up to make it easier to get in and out

All the desks had lids to lean on while reading or writing. The design was ideal as we had somewhere to keep our pencil boxes, etc. which in turn gave us a sense of belonging in 'our' classroom.

Heating in the classroom

There was a coal fire in each classroom in winter. All the fireplaces had to be cleaned, which was a the job of the caretaker. Every winter evening he would also have to fill each coal scuttle with coal and firewood. Old exercise books were used for paper. One of my teachers hid away some of the coal in a cupboard on mild days for use later when it was cold, but when the headmistress found out, the teacher was reprimanded.

How classrooms changed between Victorian times and the mid 20th century

Apart from the facts that the early 1900s classrooms

• were large enough for 60 and

• were heated with coal fires,

my mother could have been describing the classrooms where I was taught in the 1940s and 1950s.

She could also have been describing Victorian schoolrooms as shown in various books and museums.

In fact her school was built in the last year of Queen Victoria's reign to earlier Victorian plans.