The scholarship - what was then the 11+ exam

My brothers Jim and Ted started at the same elementary school as me, and they were both put in for the scholarship, as the 11 plus exam was then called. Passing it meant formal education after 14 at a good school and a path to a good job.

I wasn't put in for it. I don't know whether this was because I was a girl or because the school didn't think I was good enough.

Ted passed to a school at Lower Edmonton which was a type of grammar school, but I'm not sure whether it was called a grammar school. What mattered was that he passed the scholarship.

When the results came through, the names of those who passed were read out in all the classrooms. When Ted's name was read out, it was by the mistress who had cause to dislike me, as no doubt she had been informed by the headmistress over the affair of my hair. She said in a loud voice so everyone could hear, "Florence Cole, your brothers will be ashamed to take you out in later life". You can imagine how I felt!

The passage of time showed that it was not so, as my brothers were always there for me.

Jim passed to The Latymer, which was a highly renowned school where the teachers wore gown and the girls wore navy drill slips and white blouses with two colour blue ties. In the summer, both the boys and the girls wore straw hats with the Latymer badge on the band.

I understand that most of the children were paid for. We were a working class family and my mother could not afford to buy the badge. I clearly remember Jim going up to his bedroom and drawing the badge on the band of his hat and embroidering it. I get very sad when I think that he had to do that. 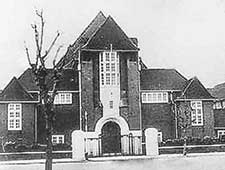 The best secondary school in the wider area: The Latymer in the early 1900s.

A class at The Latymer School, Edmonton, about 1918, courtesy of Christine Hart whose Haynes family lived in Edmonton.

Jim was very industrious and clever, and when he left the Latymer, he was its top boy. He passed entrance exams to both Oxford and Cambridge, but our father wouldn't let him go because he said that Jim had to earn to support the family, our father having been invalided out from work. Jim bitterly resented being prevented from going to university because he said that he could have managed to do that and support the family in his spare time.

No school was available in the early years of the 20th century for those of us who failed the scholarship - unless of course parents could afford to pay. Money had a lot to do with the quality and extent of education then. As an example in my husband's family. My husband was the second oldest of nine children, and whereas his two youngest brothers went to London University, his family could not afford to send him because they were, at the time, still bringing up young children.

So all my husband's qualifications came from evening classes while he was earning in full time work during the day. Then he went out to the colonies for a good job. He came back to England once it was obvious that his health was being affected. I do admire him for his commitment.

Having failed the 11+ or never been put in for it, the only option was to start paid work.

I left school at 14 and my mother sent me to earn in a factory making men's shirts. I was only a child at the time and had been brought up to do whatever my parents said. However, I did resent it. I was always good at mental arithmetic at school and could easily have gone into a much better job if my parents had bothered with me. Even just working in a shop would have been better.

I don't remember any of my contemporaries going to work in service at the big houses. Perhaps it was dying out by then, as it was the start of the 1920s. Certainly various aunts of a generation earlier had been in service in wealthy houses.

Some of the boys were attached to various businesses to work their way up and learn the trade, but life was not fair. My husband's brother started out as an errand boy and the story goes that when he wanted to leave for something better, he was given bad references by his employer because he was such a good worker that the employer didn't want him to leave.