When coal fires were the main form of heating

Before central heating arrived in homes, open coal fires were the main form of heating rooms. 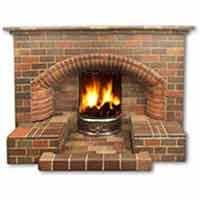 A real coal fire burning in a grate. As ashes were considered unsightly, it was fashionable to have a removable stove enamelled, vented panel to hide them.

Open fires looked lovely, with multicoloured flames dancing above the coal, and glowing caves between the pieces of coal, but they were draughty, dirty, messy, inefficient, and a lot of work. In the 1940s when I was a child, they were effectively the only form of heating in main living areas. Other rooms had no heating.

Clearing up the fire from the night before

The fire had to be remade each morning which was the coldest time of the day. The first task was to remove the old ash from beneath the fire grate (a cast iron grid or basket which held the coal). The grate was raised up to allow air in and to let the ashes fall into a pan, and this pan had to be taken out and emptied into the dustbin, a process which created clouds of dust. Although most of the ashes did collect in the pan, the space below still needed to be swept out, which made more dust.

Laying a new fire was a skill which most people in the 1940s knew and understood because it was so commonplace. You had to start with a few sheets of crumpled newspaper which would burn easily. Next came something like dry twigs or thin shavings of wood, known as 'kindling', stacked loosely up round the paper so that enough air would be drawn though it by the heat of the flame. Wood shavings or dry twigs were often just bi-products of gardening or carpentry, and sticks of firewood could be bought quite cheaply at the local ironmongers. After the kindling came the coal.

The paper was lit in several places with a match or a lighted wax taper or a rolled newspaper spill. 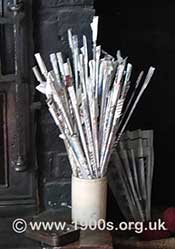 Spills for fire lighting at a distance, made of rolled newspaper

When time came to get a scuttle of coal from the outside coal bunker there was always an argument as to who should go. The unfortunate person who was eventually chosen knew full well that they would find that their spot around the fire would be taken by someone else in a large family when they returned. 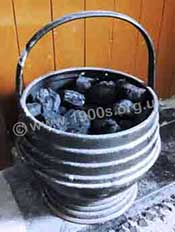 Above: Coal scuttle for storing coal beside a fireplace. One of many designs.

Right: Coal scuttle for throwing the coal onto the fire by grasping the scuttle's handles using both hands

Sometimes the fire needed help to start. This could be because the wind down the chimney was in the wrong direction, or there was not enough or too much of it, or there was not enough kindling, or the coal was damp, or it was a poor batch of coal, or for any one of a thousand and one other reasons. My father used to put an asbestos sheet with a handle on it across the front of the fireplace, to increase the draught through the grate, which helped the fire to 'draw'. This was very effective, and quite exciting. You could hear the fire roaring away behind the asbestos sheet, although, surprisingly, when the sheet was taken away, the fire seemed quite tame. 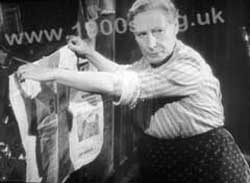 On one occasion our asbestos sheet had been left outside, and had got wet. So when it was placed in front of the fire, and the fire got going well, the sheet got hot, the moisture in it vaporised, and the whole sheet exploded, sending pieces of asbestos across the room. (In those days, asbestos was not considered dangerous: indeed, my father made his own rawl plugs by mixing asbestos wool with plaster powder.)

Sometimes, instead of the asbestos sheet, my father used a newspaper held carefully across the fireplace, but this was a bit risky, because as the draught increased the newspaper could be sucked in and up the chimney.

I remember watching my dad regularly holding a sheet of newspaper across the fireplace in our tiny East London terraced house, in the late fifties and early sixties. On one such an occasion, someone knocked at our door to say that our chimney was on fire!

When I was a child my father lit our coal fire with a device that I have never seen elsewhere. It was a hard rectangular block of something with a cage of wire round it and a long wire handle in a specially shaped container for paraffin. After soaking the block in the paraffin, the block in its cage was placed under the kindling, paper, etc. which was then lit. The block itself didn’t burn, just the paraffin, and it worked jolly well as far as I can remember. This was in Bury St Edmunds in Suffolk in the 1940s/50s. Can anyone remember what the block was made of and the name of the device?

Although coal fires could make one feel warm just by looking cheerful, they were not ideal for heating. They caused draughts as they drew in oxygen from the air to burn; and the radiant heat dried skin if one sat in the direct glare. It was all too common to have cold feet and a hot face. In Victorian times rooms with coal fires had elegant portable face shields that could be moved around and suitably placed for individuals, but by the time I was a chid they seemed to have gone out of fashion. I can't imagine why.

The 'back boiler' on some coal fires

Our original cast iron fireplace had a 'back boiler behind the regular coal fire, and this heated our water.

There was a pull-out damper which directed the hot gases under the fire and on to behind the water tank. This accordingly controlled the temperature of the water.

It was normal practice at bedtime to put small particles and lumps of wet coal on top of the by now low-burning coals - called banking the fire - so that there was no path for air to rise through. This greatly slowed combustion so that judicious use of bellows would coax them into flame again the next morning. This kept the water hot overnight and saved having to clean out the grate and set and light a new fire.

Chimney fires can take place when there is a large soot build-up on the inside walls of a chimney. Although soot is the product of burning it is, nevertheless, iinflammable and can catch light if the fire in the grate below is burning particularly strongly with flames reaching up into the chimney. The result is visible as extra smoke pouring out of the top and in some cases flames can be seen emerging as well. The flames inside the chimney in this situiation draw fresh air up from the bottom. The result causes a roaring sound and outside the smoke has a unique characteristic smell. The heat produced can damage the brickwork of the chimney. It is for this reason that chimneys need to be swept every few years.

My mother always seemed to be very concerned not to have our coal fire burning too fiercely. In fact she often panicked if she thought that the flames were getting too high in case the chimney might catch fire. I suppose her family's chimney must have caught light before she was married, or she would not have been so concerned. As far as I know, no chimney in ours ever did catch fire.

The way to prevent a chimney catching fire was to have the chimney swept every 2 - 3 years, and of course, not to built the fire up so much that the flames went too high up the chimney. However this wasn't as simple as it may seem, as it was natural to make the fire 'nice and hot'. Then, though, the coal could burst into flame quite suddenly.

What the neighbours thought

Almost the worst part of a chimney catching fire was that all the neighbours could see what was going on. It was frowned upon to allow one's chimney to catch fire because it was considered to show a lack of proper management. Householders should, it was felt, have had the chimney swept before it got that bad.

How the chimney fire could be put out

It was difficult to put out chimney fires. Pouring water onto the fire didn't help, because the fire was in the chimney, not in the grate: pouring water on only succeeded in filling the room with smoke and ash. The best method was to starve the fire of oxygen, by blocking off the fireplace completely with an asbestos (or metal) sheet. If the fire could not be controlled, the fire brigade had to be called, which the neighbourhood enjoyed, but which was deeply embarrassing for the victim.

Photographs by the webmaster with acknowledgments to Tilford Museum of Rural Life and Milton Keynes Museum.