Homes 'frozen up' in past winters before central heating

What being 'frozen up' meant 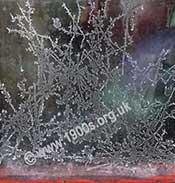 Lacy ice patterns on a bedroom window before central heating

Winters were much colder when I was growing up in the 1940s and 1950s - or was it just that heating was inadequate? As soon as the temperature dropped below freezing, water in homes started turning to ice. Eventually this caused water pipes to be blocked with ice. Taps turned on, but no water came out. Water in basins and baths, etc did not run away. This was known as being 'frozen up'. It was really miserable being so cold, but to add to the misery there could be no hot drinks and no cooking. (There were no microwave ovens then and cooking was largely done by boiling in saucepans of water on a hob.) Then there was the fear of burst pipes. This was because water expands when it turns to ice which increases the pressure inside the pipes making them burst. Bursts weren't noticed until the thaw came because the ice, being solid, could not seep through the cracks, but once the thaw came, there were floods. To make matters worse, no-one had any idea which part of which pipe would give way first. So we had to be vigilant with buckets and bowls ready to collect the drips.

Why being frozen up was widespread in the past

Before central heating in homes, being 'frozen up' was a regular winter hazard. No-one I knew in the 1940s and 1950s had central heating at home and coal for heating was rationed. Our house - built in the 1930s and typical of its time - had solid brick walls rather than the cavity walls of later houses, and the loft wasn't lagged.

Cold water tanks tended to be in lofts which were cold. (Hot water tanks were in airing cupboards in one of the rooms inside the house - the bathroom where one existed.) Cold tanks, which were themselves cold in cold weather, were fed and topped up from cold water mains supplies which, being outside the house, were inevitably colder still. All too often pipes were not lagged.

That fact that being frozen up is not a feature of today is due to improved building practices with better insulation, warmer winters and the widespread installation of central heating. Homes started being centrally heated round about 1950 or 1960, but the date has to be an approximation because wealthier homes and public buildings had it earlier and poorer homes later.

Early attempts at minimising being frozen up

The problem of burst pipes was lessened (but not eliminated) by pipes tending to be made of lead, a flexible metal. However lead is poisonous. So where water was left in the pipes for any length of time, it not only tasted bad but was actually poisonous. Fortunately water was seldom left in pipes for long enough to cause significant hazards, although there were cases of lead poisoning.

Gradually lead pipes were replaced by copper or plastic pipes and run wherever possible inside rather than outside buildings, and much more lagging was introduced.

How to keep the outside flush lavatory working

In our Victorian terraces we had an outside lavatory that would freeze solid in cold weather. The cast iron tank high up on the wall would be a lump of ice. So my father would turn off the water inside the house last thing at night, then flush the bowl. This way the tank was empty of water and would not freeze up. Then he would put lots of salt into the bowl and put an old rug over it. If one of the family needed to go in the night there were chamber pots under beds.


Life while frozen up

It was colder at night than in the day, so in freezing weather householders woke up to the fear and question of whether or not one of their pipes had burst. The first sign was that a lavatory wouldn't flush or that there was no running water.

It was common on a winter's morning to wake up to find ice on the insides of the windows of bedrooms, where the condensation had frozen. Milk on the doorstep from the milkman was frozen solid.

A compensation was that ponds were frozen solid, which was fun. In really bad winters, people were skating on the ponds. My mother took me to see, but wouldn't let me on the ice. In retrospect I am surprised that skating on ponds was allowed, but health and safety was not an issue then. I have since heard that people were trapped under broken ice once the thaw started, and some had to be taken to hospital.

The two smallest of us children slept between mum and dad to keep warm and the remaining three all slept in one bed. We resorted to putting house bricks on the fire until they changed to a light colour when hot, then lifting them off onto a shovel. They were then wrapped in an old piece of blanket and put into our beds.

There was a fireplace in the front bedroom but the coal ration didn't stretch to that being used! The two other bedrooms had no fireplaces so we relied on bottles, bricks and body warmth. Some people had rubber hot water bottle from before the war, these were no longer available during the war, so when they wore out it was back to the old house brick and stone hot water bottle.

Making tea with no running water

On the first day of unexpectedly being frozen up, we hadn't saved water from the previous day. There was of course no running water. So we made our breakfast pot of tea from the water in last night's hot water bottles. It didn't taste nice but it was better than nothing.

Ice patterns on windows - admired from the warmth of bed

On cold winter-mornings I used to love to look at the swirly patterns of ice on the inside of the window panes. My children can't believe that I used to sleep in such conditions. I am glad that they sleep in their warm double-glazed modern bedrooms, but part of me is sad that they will never experience the thrill of seeing those unique icy-patterns for themselves first thing in the morning.

Sanding the pavement outside the house

It was common practice to expect every household to be responsible for the area of pavement outside their own house - sadly no longer the case. So everybody would save the ash from their coal fires to spread onto the pavement to stop people slipping over.

Locating leaks and getting a plumber

Once the pipes began to thaw, the search for leaks began. This was not always straightforward because water can seep along surfaces and just drip from its lowest point. The worst fear was that the drips were above a ceiling because if allowed to continue they could bring the ceiling down.

Unfortunately it was seldom quick to get a plumber to come out to the house because so many houses were calling on plumbers' services. While waiting for a plumber's arrival, buckets were placed to collect the water. If it was a bad leak, emptying and replacing the buckets was continuous work. Where sinks were frozen up, the emptying had to be outside the house - a cold job.

When a plumber did arrive, he dried the outside of the pipe - normally in the loft - and went along it with a blowlamp or a hot water bottle. This encouraged more ice inside the pipe to melt, making it seep out more quickly so identifying where the problem lay. He then replaced that portion of pipe-work.