I can just remember the dairy shop, when I was a young child in the 1940s. It was called the United Dairies or just the UD, and was a very clean looking shop.

Just behind the shop was the large depot which housed the horses that were used for the home deliveries. There was also an office there where the odd pint of milk could be bought. The main impression that the depot made on me was the perm­anently wet floor. I suppose that it was frequently sluiced down with water to keep it clean.

The shop didn't last long, as most households had their milk delivered and customers started going to grocers for the odd pint of milk.

In the early 1940s, the UD delivered milk from a horse-drawn float. My mother would look out to see that no neighbours were watching and then go out to the road to shovel up the horse's dung for the garden.

I must still have been very young when the horse-drawn deliveries were replaced by motorised vehicles. Around the same time, the shop closed, presumably because milk, butter and cheese were available from grocers. The milk deliveries continued though. 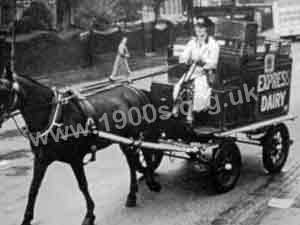 Milk deliveries during World War Two, horse drawn and with a woman driver. In the effects of Ena Cole. 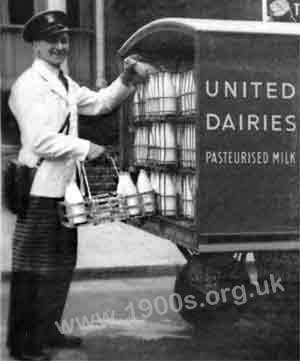 Milkman's uniform. Note the black peaked hat, the white overall, the leather shoulder bag for money and the protective apron. 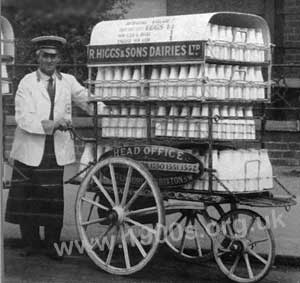 The milk bottles, rather than milk churns, in this photo suggest the mid-20th Century, but handcarts were used for milk deliveries in the early 1900s. Photographed in Eastbourne Museum of Shops. 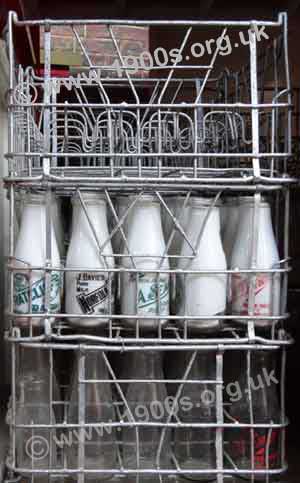 All the milk crates in and before the 1940s were metal as shown in this photographed taken in Beaulieu Motor Museum.

Milk floats came in all shapes and sizes. The following three images enlarge on tap/click. They were taken at the London Harness Horse Parade 2015, and are courtesy of Thomas Franklin whose family own several old carts and a horse for display purposes. 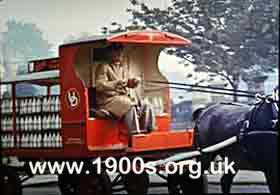 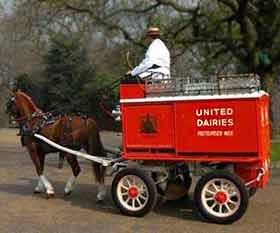 Horse-drawn 1940s United Dairies (UD) milk float, courtesy of Laurie Prior who describes it as, "Just like I used to see in the 1940s in Harrow-on-the-Hill". 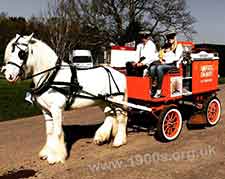 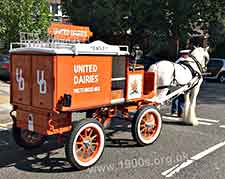 The above three thumbails enlarge on tap/click.

The milkman always wore a uniform, which I think may have been different from one diary to another. Milkmen I saw always had a white peaked cap, a white overall and a longish of apron to protect their trousers. 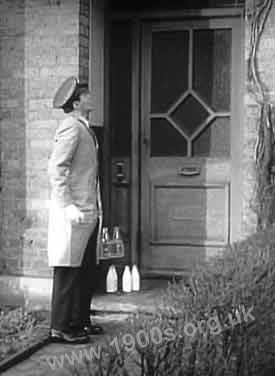 The milkman called for payment every week. He put the money into a large leather shoulder bag which had separate pockets for the different denominations of coins.

Cold weather and the milkman's gloves 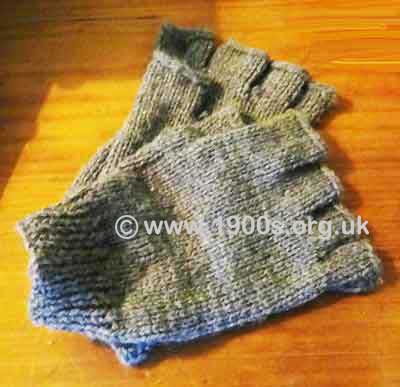 Fingerless gloves, as worn in cold weather by delivery men who handled money on customers' doorsteps 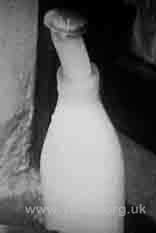 Milk bottle left on a doorstep in a cold winter. The frozen milk, having expanded, has pushed the top off the milk, and the milk is solid.

In freezing weather when the milk was delivered early in the morning, it was not uncommon to find it frozen in the bottle. Then, as water swells up when it becomes ice, the bottle top was pushed up out of the bottle.

In winter the milkman's hands got very cold, as he needed his fingers free for handling the money. Like other delivery men in winter, he wore knitted gloves which were open at the top parts of the fingers. 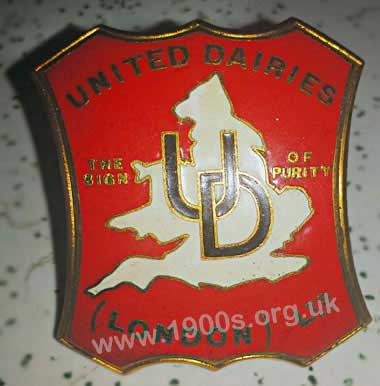 UD (United Dairies) milkman's cap badge, courtesy of David Hebden who reports that, as a child in the 1940s, he used to help his uncle with the milk deliveries, standing on the running board as the milk float moved from house to house.