There were several grocers in Edgware when I was a child there in the 1940s. All were branches of chain stores, which is notable because chain stores had not yet come in for other types of shops. Some such shops may have had more than one branch, but not enough to be called chain stores. The Co-op was one of the few chain stores that still exists as I write.

In the 1950s there always seemed to be a local Co-op near where you lived in the UK, so you didn't have to go to the main shopping area of your nearest town. A Co-op was always near enough to 'send the kids' with a list for bits and pieces. I used to get threepence or sixpence (old money) for my trouble from a neighbour to buy some sweets. That of course was after sweets came off ration in 1953. The brass chain pulley money systems were in use in all the ubiquitous Co-op shops around us in the Birmingham area.

In nearby Burnt Oak there was a Co-op department store. Its goods were extremely wide-ranging and not-at-all just groceries.

My recollections of the Edgware Co-op - and even of the Co-op department store are of a somewhat dark and dreary shops. They were probably clean, but the decor did little to bear that out. So it was not surprising that my mother preferred Sainsburys for fresh groceries.

My mother went to the Co-op for non-perishable and off-ration items because it gave a small percentage back to club members in the form of 'dividend'. This was also the case for her own mother's patronage of early 1900s Co-op shops.

At every sale we were given a chit which was a receipt to of how much spent so that we could check the dividend that it had earned. However the chits were so tiny that many must have got lost.

The amount of a dividend

From memory, dividend was about 2% or 3% of what the Co-op member spent. This would be paid out annually or biannually, and my mother, with kids in tow, had to walk up to the head office in town to receive her dividend in cash. This was in Scotland.

How families calculated the amount of the dividend

When the dividend was due, my older sister and I had to empty out our bag of receipt chits. Then we had add them up so that my mother could work out her dividend. It was a huge task as there were hundreds of them. We usually did the sums in groups of twenty receipts at a time, writing the amounts in a column and then each of us would add it up separately. There were no calculators in those days. We then compared the totals to see if we agreed. When we didn't agree, we had to start over again. This was long before decimal currency of course, so the calculations were in pounds, shillings and pence which were more complicated to do.

The importance of the dividend to families

The dividend was hugely important to families. My mother received a fixed sum of weekly housekeeping money from my father, and the budget was tight. The dividend was therefore a vital extra.

On one memorable occasion my mother received more than she expected which sent her into a real rage with us kids. This was because we did most of the shopping and we were expected to remember to keep every receipt chit and put it in a special bag. Obviously we had lost some, which was considered almost criminal behaviour on our part.

Below are images of my father's Co-op dividend statements for the half year ending 4th March 1939 - the only year's statement that has survived. 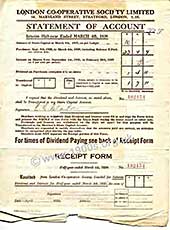 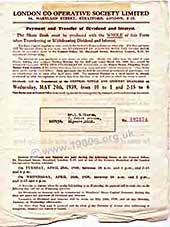 At the Co-op sales counter

The sales system was totally manual, and worked like this:

The shop assistant or cashier had a receipt book with pages that were perforated to produce the tear-off recept chits, as shown in the above photo. The top copy was made from a very flimsy type of paper and was coloured yellow in our Co-op. There was a sheet of carbon paper and a duplicate page underneath.

The shop assistant would ask the customer for their Co-op number which she wrote on the chit along with the amount paid. If the item purchased was something expensive like a winter coat, this would also be written on the receipt chit. (The chit in the above image is marked for coal, a particularly expensive item.)

The cashier carefully tore off the top copy and gave it to the customer. The bottom copy was kept in the receipt book until the end of the day.

Inside the Co-op store office

The copies of the chits in their receipt books went to an office to be added up using a hand operated adding machine. This was a large clunky metal instrument with a lever on the side that was cranked after each entry. The money in the tills would then be counted to check that it agreed with the adding machine total. If it didn't, a staff member would be held to account and a shortfall often had to be repaid from their wages.