The Green Shield stamp scheme was an innovation that was exciting and unique in the late 1950s and into the 1970s. I don't believe that we had ever seen anything like it before in the UK. It was aimed at increasing custom at participating sales outlets. 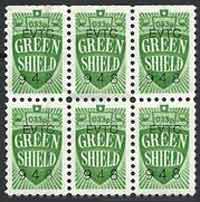 Green Shield stamps, what they were and how the scheme worked

Green Shield stamps were stamps given away by participating retailers nationally. The number of stamps depended on the how much we spent. We stuck them into a free book printed with outlines showing where to stick the stamps. This made them less likely to loose and easy to count. When a book was full, it could be exchanged for a new one at any participating retail outlet. Gifts could be chosen from a catalogue along with the price in stamps of each item. Green Shield stamps could not be exchanged for money. 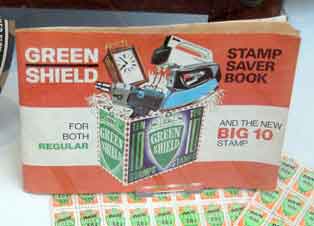 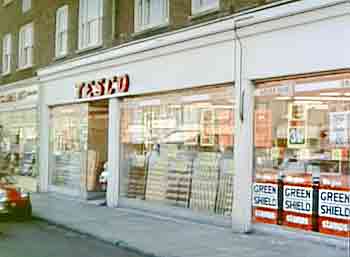 Posters in a window of a Tesco shop, showing that it belonged to the Green Shield stamp scheme. Screenshot from an old film. 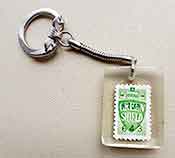 The value of each stamp was minimal, but there was something rather enticing about collecting them, sticking them into their book and watching the collection grow. So I suppose that we did tend to go to retailers who were in the scheme rather than those who were not - rather like the Co-op dividend scheme.

The headquarters of the Green Shield stamp scheme

As it happened, the scheme was organised from a tall newly built building in Edgware, where I grew up. The building was known as the Green Shield Tower.

The beginning and end of Green Shield stamps

The Green Shield stamp scheme was relatively shortlived. It was introduced into the UK in 1958 by Richard Tompkins, but in 1973 he started rebranding it as Argos. My recollection is that the scheme started petering out sometime after that.