How shops wrapped and packaged goods in 1940s wartime Britain

Much of the packaging of shop goods in my 1940s childhood was little different how it was early in the century, as described in my mother's recollections of shopping in the early 1900s. The main difference was that more goods were arriving in the shops ready-packaged, although this was still on a very much smaller scale than today. 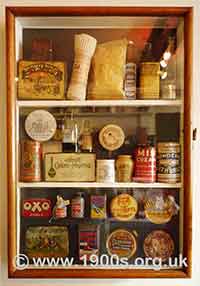 Samples of goods sold in pre-packaged form - mainly in tins, stone-ware jars and glass bottles. Photographed in the Cambridge and County Folk Museum.

Pre-packaging was mainly in tins, glass and stone jars, and there were far, far more lidded tins around than there are today. It was never difficult for my friends and me to get hold of an empty and reasonably attractive lidded tin for craft or storing trinkets. The disadvantage of those tins, though, was that the colourful outsides did scratch easily. My fancy-dress top-hat for the World War Two street peace party was made from a custard tin.

Milk bottles were always made of glass with crimped foil tops.

Liquid poisons were always sold in ridged glass bottles, so that even blind people could tell that they were poisonous. The bottles were usually either green or brown which was an additional alert for sighted people.

I understood that anyone could buy poisons as long as they signed a poison book, but there may have been restrictions that I didn't know about.

I don't know how solid or powered poisons were sold. Do you?

Packaging at the time of sale

Many goods were weighed or measured out and wrapped specially for every customer, just as they had been for years. Biscuits, for example, were sold loose for much of my childhood. This presented problems because they broke easily while being weighed out and in their paper bags on the way home. In fact broken biscuits were sold off cheaply. It was very difficult indeed to keep biscuits crisp because they were continually exposed to the air in the shop before we ever got them, because the large supply tins had to be opened every time customers bought biscuits. 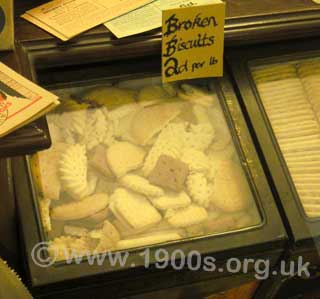 Broken biscuits in a large transparent top tin which had to be opened for every sale, In the 1940s it is doubtful that the range would have been as large as shown in the photograph. On the right is part of a similar tin of unbroken biscuits. Photographed in Eastbourne Museum of Shops.

For packaging butter, tea and sugar, see the Sainsburys page.

A pleasant benefit of minimal pre-packaging

The lack of packaging leads to shop smells

The lack of packaging in shops gave rise to something I recall with nostalgia from my childhood. It was the smell of shops: A grocer's shop smelled like a grocer's shop, a greengrocer's shop smelled like a greengrocer's and so on. The reason was that the food was open to the air. With the advent of almost entirely pre-sealed packaging in the 1950s and 60, all those wonderful aromas disappeared - and along with them, the individual character of the shops.

Paper bags were the norm for packaging wherever possible, and they came in several sizes. If the stock was pre-war, the shop's name might be printed on the front. There were white ones and brown ones. A wad of them hung on a string and were torn off as required. 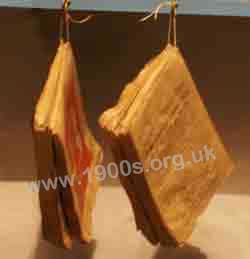 Brown paper bags on a string - common in shops in the 1940s. Photographed in Fagans Museum of Welsh Life.

Paper bags had a very limited life. They disintegrated if they got wet, either from holding damp produce or from rain, and they crumpled easily.

Boots the chemist wrapped goods in brown paper parcels, tied with string. They did this for every customer at the point of sale which was extremely labour intensive. It was still going on in the late 1950s when I had a holiday job there.

Chemists made up doctor's prescriptions themselves. Pills were packaged in small brown glass bottles, ointments in cardboard tubs with lids and liquids in glass bottles, invariably labelled as 'the mixture' irrespective of whatever happened to be in them.

When shopping baskets got overfilled, there were no plastic bags tucked away for emergency use. The answer was string bags. They were made of ordinary brown string woven into a fairly large open net with a string handle which didn't take up much space in a shopping basket. Being brown string, they always looked rather dirty and were accordingly popular for carrying vegetables, which were never sold ready-washed. Potatoes and carrots were the worse offenders. We always had to wash them at home before peeling them, and the water ended up black and gritty.

Women also carried string bags for shopping. My mother's string bag would have the veggies in it, mostly in brown paper bags and it would then hang on the back of the pantry door with the vegetables in it ready to use.