There were several grocers in Edgware when I was a child there in the 1940s. All were branches of chain stores, which is notable because chain stores had not yet come in for other types of shops. Notable were Sainsburys and the Co-op. Some of the other shops may have had more than one branch, but not enough to be called chain stores.

Payantake was one of the grocery chain stores that has since disappeared.

There really wasn't a D in the name. It wasn't Pay-AND-take. So the custom of spelling badly to attract attention - like sox for socks - was established as early as the 1940s.

My mother always went to Payantake for biscuits as she felt that Payantake took more care to keep the air away from the biscuits. 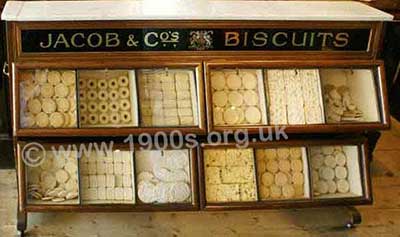 Display case for biscuits. Although the case is the genuine 1940s-style that I remember in Payantake, there was certainly not the wide variety of biscuits shown in the photo!

At that time, biscuits were not pre-packaged, but weighed out to customers' requirements from large tins like those shown below. So there was plenty of opportunity for the biscuits to be open to the are and lose their crispness. (My mother always put her main purchase of biscuits into a large tin with a smaller supply into a smaller tin which she refilled when empty. She said that this way the main bulk of the biscuits was not so frequently exposed to the air.)

There was also plenty of opportunity for the biscuits to break as after weighing out they were put into paper bags which then went into customers' baskets. Possibly some women brought their own tins, but I don't remember this.

One advantage of these biscuit display tins was that it was easy to tell whether or not the biscuits were broken. Broken biscuits were sold at a discount. 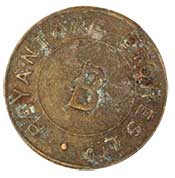 This token was sent to me by Shona Bonella, whose family speculate that it may have come from the coin collection of a late uncle in the 1940s or 50s. Otherwise they know nothing about it except that it is about 2.3 cm in diameter and that both sides are identical. It clearly relates to Payantake and is made of some sort of metal. There is a large letter B in the centre and the text round the edge reads 'PAYANTAKE STORES LTD'

Do you have any information or suggestions about how it might have been used?

Towards a self-service grocer

In the 1940s, the Payantake in Edgware was an ordinary counter service shop. After that I seldom if ever had cause to go into it. Perhaps if I had, I would have seen changes - see the two boxes.

I remember the Payantakes in Palmers Green at 360 Green Lanes, London N13 in about 1938-9. It was so modern and different from other grocery stores. The goods were displayed on three sides of the shop, grouped by products; biscuits were first on the left, then a group of baking items and at each group there was a gap in the display and at least one assistant behind the counter. My mother used to put her shopping basket on the stainless steel rails and order her biscuits which were weighed out into paper bags, paid for and put into her basket. She slid the basket to the next section and continued round the shop. This arrangement was only a short step to self-service and a check-out to pay for everything at the end, but I am not aware that Payantake ventured this far.

I was born in 1944 and lived in Edgware until 1958. I share all these memories of Payantake, and towards the end of my time in Edgware I distinctly remember the shop having wire baskets to be collected on entering, and the checkout till at the exit, replacing the counter service. This was a completely novel experience, long before the rise of the big supermarkets and the demise of that traditional look in Sainsbury's, half way up Station Road.

I always enjoy a puzzle so I decided to delve a little deeper into the Payantake story.

From these random notes, the story looks quite complicated but I think it would be true to say the immediate pre-WW2 Payantake Stores were an experiment by International Stores to try out features that are apparent in the recollections already published here.

As Payantake was so innovative, it is a pity that it disappeared.