Small family grocers seem to have been most common in rural areas where chain store grocers like the Sainsburys, Co-ops and Payantakes did not exist. Sadly they almost all disappeared towards the end of the century with the advent of supermarkets. Certainly, although there were several grocers in Edgware when I was a child in the 1940s, there were no small family grocers.

I lived in a village in rural Cambridgeshire during the Second World War and the nearest grocer was several miles away. He or his driver delivered our grocery order to us and our neighbours in his van.

We were fortunate because we were on the phone due to my father being a wartime ARP warden. Being on the phone was fairly unusual at the time and meant that my mother could phone in her order. Our neighbour was a doctor, so he too was on the phone, but the family opposite was not. One of the children had to cycle to the grocer with the family's order which must have been a relentless chore because orders had to go in quite frequently, there being no fridges to keep milk and butter fresh.

I don't remember the person who did the deliveries being particularly friendly, but his rounds covered a wide area and there was no competition for his services.

I am grateful to Viv Nunn for information on her family grocer C.W.Pyle. The shop is shown in the photo and is clearly part of a row of shops. It traded until the 1960s. 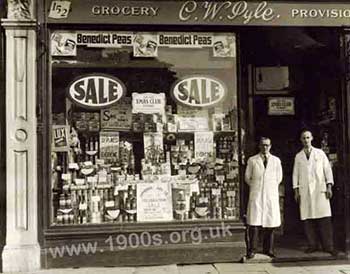 A family grocer shop in 1945, courtesy of Viv Nunn. The shop belonged to her grandfather and was there until the early 1960s. Tap/click to enlarge 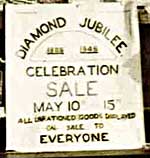 Detail of the Jubilee placard in the photo

The photo is of interest for several reasons:

It can be dated to 1945 because the placard in the window declares the shop's diamond jubilee (60 years), and computer enhancement of the original photo gives the dates as 1885-1945.

The placard points out that all the goods displayed are off-ration and on sale to everyone. This shows that the shop was trying get more trade by showing prospective customers that they did not have to stay with their registered grocer for anything other than rationed goods.

One wonders what the off-ration goods in the window are. The enlargement on tap/click seems to show mainly tinned foods and bottled sauces.

The shop had a Christmas club and was currently having a sale.

Viv Nunn reports that the shop's paper bags were printed with something like 'Pyle's products please prudent people' - Pyle being the family name.

The white coats of the assistants are typical of what I re­member seeing grocery staff wearing in the 1940s. In wartime of course, those staff were mainly women and older men.