Air raid wardens were part of what was known as Air Raid Precautions (ARP) which was set up on 1 September 1939 with the main task of enforcing a night-time blackout over the country. This was necessary because, once it was dark, no light was allowed to show from outside any property. The fear was that enemy aircraft would be looking out for any signs of houses or factories to bomb - and the fear was fully justified! Every local council was responsible for organising its ARP wardens along with ambulance drivers, rescue parties, and liaison with police and fire brigades. During the war, the ARP was phased into an umbrella body called the Civil Defence which lasted throughout the war.

Who ARP wardens were

ARP wardens were either too old or infirm for the military or they were in reserved occupations. About one in six were women. Everyone I knew called them simply ARP men. They worked small areas under the chief warden for that area.

The uniform and kit of an ARP warden

ARP wardens were instantly recognisable from their uniform. It was black battle dress and trousers (or something as near as possible), a Civil Defence armband and a steel helmet. 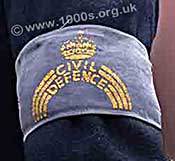 Each ARP warden carried their gas mask, a police whistle, a torch, a haversack with a first aid kit, and they wore an ARP lapel badge. 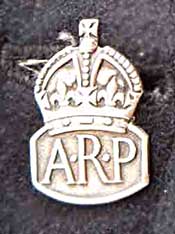 The helmet for most ARP wardens was black with a white W, but the chief ARP warden for an area had a white helmet with a black W painted on it, so distinguishing him from the other ARP wardens.

Man dressed authentically as a 1940s ARP chief warden*. Note the white helmet with its black W, the gas mask in its canvas bag and the pocket chain carrying a whistle.

The work of ARP wardens

The work of ARP wardens specifically related to air raids. In this it was different from that of a home guards. The ARP wardens were expected to work two or three nights a week, but this increased as the severity of the air raids increased.

The local nature of the work

An ARP warden was appointed to every urban street. His main task was to check everyone's blackout. It was illegal to show any light after dark, so if he saw a chink of light, he would shout "Put that light out!". If necessary, he would knock on doors to reinforce the message.

Some houses in our road had some of their back fences removed so that the warden could patrol through the back gardens to see if there was any light showing.

He did more: He would patrol his streets all night to watch for dropped incendiary bombs starting house fires whilst the householders were hiding away in their shelters.

"Put that light out!" or risk the wrath of the ARP warden

Horror of horrors if the ARP man called out, "Put that light out at No.10", because if you lived in number 10, all the neighbours knew that you were endangering their lives too! You certainly made every effort to find the source of the chink of light which was causing the ire of the ARP Warden.


ARP wardens' work deal with the aftermath of dropped bombs

The ARP also dealt with the aftermath of an air raid, mainly unexpl­oded and time bombs. The wardens would clear a street of people and wait for the army bomb disposal team. All too often, they would have to clear bombed buildings and deal with the dead and survivors.

Everyone had to leave their front and back doors unlocked at night so that if the house was hit by a bomb, the rescue people could get in and deal with casualties. It was human nature for some people to take the opportunity to rob their neighbours. So part of wardens' duties were to act as special constables. Houses and shops that had been bombed had a large sign stating "Looters will be shot". I'm not sure if anybody was actually shot, but it was fair warning.

During one air raid I saw ARP men pumping water onto incendiary bombs to put out the fires. My family thought they were very brave. They would stop by our back door and my mum would give them a cup of tea.

ARP men would be on patrol from dusk till dawn the next morning.


Hours of work of ARP wardens and the lack of sleep

My father was an air raid warden. He took his turn with other wardens to patrol the locality at night to check the local houses for showing lights in the blackout and do other home front tasks as appropriate. The work meant that he went without sleep for whole nights at a time and then had to do the hard manual work of his day job as a blacksmith - a reserved occupation. This was in Midsomer Norton near Bath.

One evening he called us outside as he had heard the noise of a very large plane approaching. Even though it was dark, we could clearly see that it was German as it was very low. It carried on to Bath where it bombed the city. Although there was an anti-aircraft unit in there, it all happened so quickly that no preventative measures could be taken. I still have my father's ARP badge which is identical to the one in the photo. It is hallmarked as silver.

While my father was on an ARP patrol, he saw a German plane or doodle bug (not sure which) heading for our house. This put him in a huge dilemma: whether to rush home to warn my mother or continue his route. Luckily for him the thing suddenly changed course.

Something my father taught me that has become second nature to me in later years is to back rather than drive into a parking space. This he said was that you could drive out quickly in an emergency - and I have always done it. In practice he always went to his APR meetings by bicycle, but he did have a car for getting him to and from the factory where he was employed in a reserved occupation as an engineer on war work.

Interestingly I have come across a number of examples showing the at the Government was preparing for war well before it actually came, and the recruitment of ARP wardens is just one. In April 1937 (two years before the war actually broke out), the government created what was to be the forerunner of the ARP, the Air Raid Wardens' Service. By the time the war began it had recruited around 200,000 volunteers.

Recruitment posters for the ARP 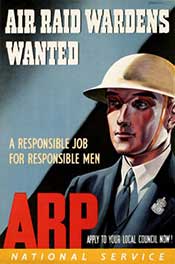 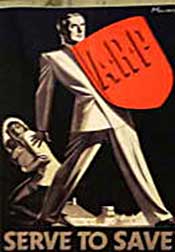 Community spirit in the ARP 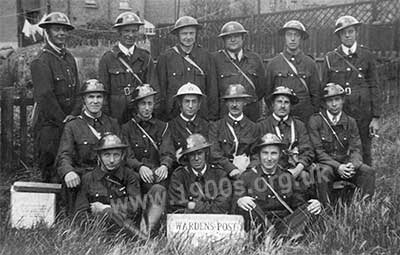 A group of World War Two ARP wardens in 1942, courtesy of Peter Fletcher. Note the white hat of the chief warden in the centre and that everyone has a shoulder strap, even though the knees and grass are hiding most of the canvas bags.