The threat of chemical attack from the air

As the Germans had used gas warfare in World War One, it was assumed that they would drop poison gas on British civilians in World War Two.

So every precaution against a gas attack was taken. The cost of it all astounds me, but there was little alternative if the public were to be kept safe.

The expected gas was 'mustard gas' which caused dreadfully painful and longlasting damage to the lungs. 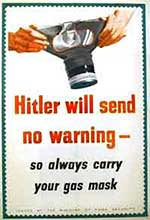 Poster warning everyone to carry their gas mask*. 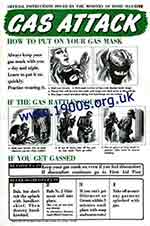 Poster on what to do in a gas attack* Tap/click for an enlarged image. 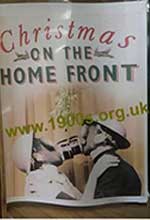 Poster of kissing through gas masks reminds me of touching elbows in the pandemic.

A gas detector was a large square board painted green, on top of a pole. To me it looked something like a large bird table. Gas sensitive paint on the board would change from yellowish green to red in the presence of mustard gas.

Gas detectors were located outside observation posts, which were underground bunkers dug very deep into the ground, probably over twelve feet or so deep, and manned by the ARP and the Home Guard who reported on the numbers and direction of enemy planes overhead,

Gas detection paint was also applied to the tops of Post Office pillar boxes to alert the public to a gas attack.

In Edmonton one of the observation posts was in Pymmes Park and another at the Cambridge Roundabout.

As a child, I remember dustbin lids painted with gas detection paint fixed to the walls of the houses in our neighbourhood. I was told that they would change colour in the event of a gas attack and that I should immediately put on my gas mask. 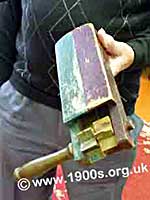 Rattle or clacker alert, held by handle and whirled round to alert for poison gas**.

Publicity about a gas attack

There was a great deal of publicity about how to recognise and cope in a gas attack. For example:

Even before the war started in 1939, a leaflet on how to store and use a gas mask was distributed to the public. There were also warning posters publicising the danger.

Cigarette cards, which have their own page, came in sets dedicated to different interests, and one set was what to do in an air raid. It was excellent at reaching the wider public because smoking was so widespread, and collecting cigarette cards was a common hobby for children. It was a rare household where no-one smoked and at the time every packet contained a cigarette card. The fact that a buyer had no idea what card was inside any packet led to considerable bartering - and hence gas attack publicity.

Neville Chamberlain, the Prime Minister in 1937 has widely been accused as an appeaser, i.e. going along with Hitler's demands rather than fighting. This is untrue and unfair - see the following box.

10 million gas masks were ordered by Neville Chamberlain as early as 1937. He knew then that war was coming, played for time as we were not yet ready, and we owe him an apology for regarding him as an appeaser.