Smoking: when everyone seemed to do it

All men seemed to smoked while I was growing up in the 1940s and into the 1950s. Of course there must have been exceptions, but they did not stand out as far as I was concerned. 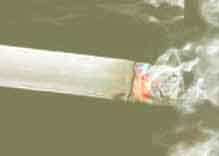 Men had of course smoked in previous years, from way before I was born. Presumably they enjoyed it, but peer pressure was part of it. To be 'in' with one's group, one had to smoke - from the gentleman 'passing the port' after a convivial dinner to the tramps tramping from one night's accommodation to the next.

By the time I was old enough to notice, smoking tobacco in pipes had largely given way in popularity to smoking cigarettes. So it was generally the older men who smoked pipes while the younger men preferred cigarettes.

I always wondered why the beards and moustaches of older men looked paler and yellowy round their mouths and noses. Only later did I realise that it was from the smoke of tobacco. These men had yellow teeth too.

My mother told me that it was not thought acceptable for 'nice' women to smoke in Victorian and Edwardian times, but that things started to change in the 1920s and 1930s. Fashionable women then smoked cigarettes from long and elegant cigarette holders which kept the smoke away from their faces.

Woman smoking through a cigarette holder

Women's cigarette holder. There were much longer ones

My mother also said that she used to smoke in the 1930s, but gave it up. I suspect that she, like most other housewives in the 1940s, had little choice due to the shortages of the war years and the austerity afterwards. Some women went back to smoking after war, but my mother - again like most other women I knew - did not.

Drawbacks of smoking, even before we knew it was dangerous

In my childhood, houses tended to reek of stale tobacco smoke, and cinemas and trains always did too. We children, almost without exeption, lived in households where adults smoked. So our clothes and hair also smelt of stale tobacco smoke. Not that any of us thought much about it at the time because we knew nothing else. It was not generally accepted that smoking was bad for health.

Incidentally my father died of lung cancer and my mother blamed herself for not helping him to stop smoking.

Smoking and the armed forces

The armed forces even encouraged men to smoke by supplying them with tobacco during the war. Whether or not this was unethical is open to question. It was not known that smoking was bad for people and presumably it was important to keep the men's spirits up. The side effects were of course addiction, although that was not a word in general use. Men smoked, so it was thought, simply because it was 'right' that they should have their pleasure.

My eldest brother was in the Navy during the war, and when he came home on leave he would usually have some large (possibly 1 lb) tins of Navy Tobacco, from which my father used to pay me to make his 'roll ups'.

Smoking was permitted and accepted in most public places. It was quite normal to be stopped in the street and asked if one had a light - presumably because the individual concerned had run out of matches or petrol for his or her lighter. It seemed the friendly thing to do to provide the light where one could. No-one seemed concerned at being approached by a perfect stranger if he or she was a fellow smoker. 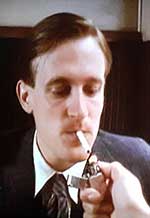 Smoker receiving a light from someone else. You can see from the position of the hand that the smoker himself is not holding the lighter.

Prices of cigarettes and the Budget

Smokers were always a target for increased taxes. My father was addicted, and every Budget when the Chancellor put up the tax on cigarettes and hence their price, my father would vow to give up - but he could never manage it. My mother, probably like lots of housewives of the time, would go along with his addiction and say that he had to have some pleasure. My parents always said that they were short of money - not that I ever thought that we went seriously without - but I did wonder which particular pot the extra spending would come out of.

How the Budget could make men give up smoking

As an impoverished National Serviceman in the RAF who was paid 7/6d per day, 4/6d per packet of cigarettes represented a lot of money. After a number of failed attempts to give up smoking, this reform galvanised me into action and I stopped immediately, never to smoke a cigarette again.

Anthony Asquith,
as quoted in The Daily Telegraph 22 November 2017

Cost of cigarettes in WW2

Cigarettes were available from machines. A packet of ten cost six pennies and a packet of 20 cost as shilling. This was in 1940-45, i.e. during the Second World War. It was felt important for morale that cigarettes remained easily available in spite of the rationing and shortages of most commodities.