This page takes 'National Service' as it was generally understood in 1950s Britain, meaning a period of conscription into the armed forces for young men after World War Two. 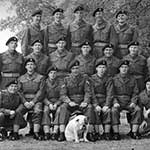 Why the UK had National Service in peace time

The origins of post-war National Service

The idea behind post-war National Service

The basic idea behind post-war National Service was that in the event of another war young men who had undertaken it would be re-called and within days be ready to serve again. In 1939 at the beginning of World War Two we had a very small standing army and as a result it took years to build up the forces to defeat the Germans.

After the end of the Second World War, National Service as peacetime conscription was formalised in the UK by the National Service Act of 1948. From 1 January 1949, all fit young men between 17 and 21 years of age were required to serve in the armed forces for 18 months, and remain on the reserve list for four years. In October 1950, in response to the British involvement in the Korean War, the service period was extended to two years.

Some National Service had been illegal!

The problem was that some soldiers were kept under arms for quite a while after the end of the WW2 and made to fight the communists in Malaya. One group refused, were court martialled for treason and due to be executed. However, when eventually questions were asked in Parliament, it was discovered that under the Act of Parliament that conscripted them they were not obliged to fight at all in any conflict which did not directly threaten the security of the Kingdom. They were quietly released and shipped home.

So when the Bill setting up post-war National Service was passed, it did not contain such an exclusion clause which meant that National Servicemen could be sent to Korea and Aden and anywhere else the government of the day decided it needed to interfere.


'National Service' as I understood it as a teenager in 1950s Britain meant that when boys were 18 years old they had to spend two years training in the armed forces. Among the people I knew, this was deeply resented - even though they may have seen the need for it following the events of World War Two. It was seen as a serious disruption to boys' continuing education and career development and something that would be distinctly unpleasant. While I was a teenager, the hope seemed to be all around me that National Service would end before it would affect my age group. In fact it didn't, not that it affected me, as a girl.

National Service ended gradually from 1960. In November 1960 the last men entered service, and call-ups formally ended on 31 December 1960. The last National Servicemen left the Armed Forces in May 1963. By this time, the two-year period had normally been shortened to 18 months.

Although all fit young men between 18 and 21 were required to do National Service, they could get this 'deferred' if they had a place for an apprenticeship or higher education. Most degree courses qualified for deferment.

In my experience, the call-up board was very helpful and did all they could to accommodate people seeking deferment. So there were men aged 21/22 and older, having been called up after their degree courses were finished, working alongside the last of the 18 year olds who had been called up direct.

Deferral simply meant that the deferred young men were excused National Service until after their further or higher education - but then they still had to do it. In this respect, my generation was fortunate. I left my grammar school in 1957 and for those of my contemporaries who went on to higher education, National Service had finished by the time they had completed their degrees or apprenticeships. My husband was one of those who never did National Service.

Structure of the National Service

The first part of the period of National Service consisted of what was called 'basic training' which was more or less the same for every conscript. This was followed by further training which was related to the work that each conscript was to expected do during the rest of his National Service, which was alongside regular servicemen. The personal experiences pages - see the menu - give more details. (This menu is not alphabetical but is in the order in which we always spoke of the armed forces at the time - probably because the Royal Air Force (RAF) was so much newer than the army and navy.

The personal experiences pages almost all come from of National Servicemen in the army or the air force. There are only two from the navy. I understand that the navy took very few conscripts.

The armed forces as a parallel way of life

When one enlisted in the armed forces, they pretty much provided everything one needed. So it became a completely parallel way of life to the civilian world. The idea was that a serviceman or woman would be provided with everything they might need and, if married, everything their families might need. It all came from government sources (everything from grocery stores to furniture for married quarters) and travel warrants. You could get your Heinz Baked Beans from a NAAFI* supermarket in Cyprus or Germany or Singapore, which was useful if the children wouldn't eat anything else and the local shops neither stocked British goods nor had English-speakers behind the counter.

The value of National Service

Resented as National Service was, most of the men I have since spoken to report that it was the making of them. They may not have enjoyed it but were the better for it. They ended up fitter than they had ever been in their lives; some learnt trades and all acquired skills that remained useful.