A word I learnt early in my childhood while World War Two was still in progress and while listening to my mother talking with other women was one that children of another generation would probably not understand. It was 'demobbed'. It seemed to be dotted throughout every conversation, which went something like, "When he is demobbed ...".

'Demobbed' was short for 'demobilised'. Let me explain. 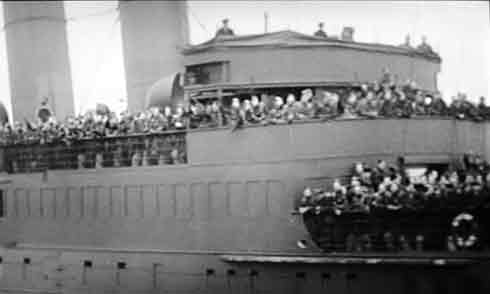 British troop ship returning servicemen for demobilisation at the end of the Second World War.

The great majority of the World War Two forces personnel were not career servicemen. They had simply been legally required to join one of the armed forces or undertake some form of war work. For this, they had been 'called up'; at the beginning of the war or in its early years. Then, at the end of the war, when their services were no longer required, they were demobilised - commonly known as 'demobbed. Having been demobbed, they were legally allowed to go back home.

Another phrase which was common at the time, but which would probably not be understood by anyone who did not live through the end of the war was 'civvy street'. It meant 'life as a civilian', ie in a world which was not at war. It was normally used in connection with earning one's living, ie employment.

During the war, I often heard questions from one woman to another, like, "What did your husband do in civvy street?" meaning "What was his job before the war?"

The term could frequently be heard after the war too, when men who felt that the war had changed them, did not know what to do with their futures, "back in civvy street".

Strictly speaking, the 'demob suit' was a suit given to every serviceman on his demobilisation, but it also came to have two other meanings. One was the full set of civilian clothes, including underwear and shoes, that servicemen were given to aid their return to civilian life and work. The other was flippant for any suit that looked inappropriate or worse for wear.

I was never aware at the time of my father wearing a demob suit, but maybe he did. I understand that the suits were good quality, were not utility and were provided off-ration, even though rationing was still in operation in the UK. Photos seem to show them as double-breasted, pin-striped. They were not, however necessarily a good fit. because of stocks running low. It must have been a major economic and industrial effort to stock every demobilised serviceman.

The men were allowed to keep their service uniforms, but I can't remember seeing my father in his after the war. I expect that the men couldn't discard them and their demob suits quickly enough as they wanted to get on with normal civilian life.

Demobbed service personnel generally had the right to return to their original employment - often to the distress of the women who had taken their place in the workplace. Also, those demobbed service personnel who wished could participate in the Government's Further Education and Training Scheme which paid university fees and an annual means-tested grant of up to £426 to cover living expenses whilst studying.

The demobilisation process took time, as men in the armed forces were stationed across the world. Even my father, who had a desk job in England, was not demobbed until 1946 and then it was only partial release in that it was to the Territorial Army Reserves - see the following 'release paper'.

My father's 1946 interim war release certificate to the Territorial Reserves. Tap/click to enlarge to a legible size.

These partial releases were probably a safety measure while the world was sorting itself out after the turmoil of the war. As far as I know, my father was never asked to do any work or attend any meetings in connection with the Territorial Army Reserves.

It also took time to repatriate British prisoners of war (POWs), particularly those the other side of the world in Japan, and even when they arrived home, they needed a recuperation period as conditions in the POW camps had been so bad.

Repatriation of POWs from Singapore

A colleague who had been a prisoner of war in the notorious Changi Jail in Singapore explained to me why repatriation of POWs from there took so long. He was not very complimentary about the British Government.

Apparently after the Japanese capitulation in WW2, the Americans and Australians flew planes round the clock to repatriate their ex-POWs. The Brits had to wait - sometimes many months for ships to come and collect them.

My colleague was eventually sent home in a ship that had been used to transport supplies from the USA in the war. Below decks had been quickly converted into sleeping accommodation with mattresses on the floor. He said it was good job they had had to wait as they had had time to build up their strengths for such a journey after the privations in the camp. The ex-POWs rigged up blankets and sheets on the deck where they slept and spent most of the day there until forced below by the bad weather in the Bay of Biscay.

I am not sure how typical this experience was but I don't think he was exaggerating his.

Demobilisation was not the same as discharge. Even once service personnel were home, they were not yet formally discharged. That came later and was not quick in coming.

My father was not completely out of the armed forces until April 1948 - see his discharge paper below. 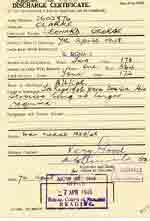 My father's 1948 total release certificate. Tap/click to enlarge to a legible size.

My father - due to his age and poor hearing - never left England during the war. So I was surprised to read on his discharge certificate that he had been awarded a war medal.

It turned out that all full-time personnel of the armed forces, wherever they were serving, so long as they had served for at least 28 days between September 1939 and September 1945 were eligible for the war medal. The British version was 36mm in diameter and struck in cupro-nickel. One side showed the head of King George VI and the other a triumphant lion trampling on a dragon, signifying the power of victory.

I don't know if these medals were sent to the individuals concerned or whether they had to be applied for. Certainly I never saw one in our house.