Propaganda on women's roles in and after WW2

Why the changing propaganda

Women needed to do men's work on the home front during World War Two, and indeed for some years afterwards because demobilisation took time after the war ended in 1945. During this time, Government propaganda was towards women adopting men's roles.

When the men returned to what was known as 'civvy street', they needed their jobs back. So began a programme of insidious propaganda in the opposite direction which I honestly hadn't appreciated until I started comparing photographs from the 1940s and 1950s. Of course that always happens with propaganda that works. That's why it works.

The new propanda could be summarised by the idiom that seemed to be everywhere in my later childhood and teens:

'A woman's place is in the home'

Dramatically different pictures of the 'ideal' woman in and after WW2

Just compare the following two pictures. The first one from wartime was clearly intended to encourage women into men's work. The other from the 1950s glorifies a woman's love of cooking in her own kitchen. 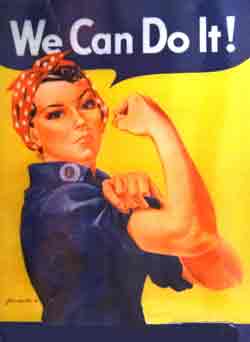 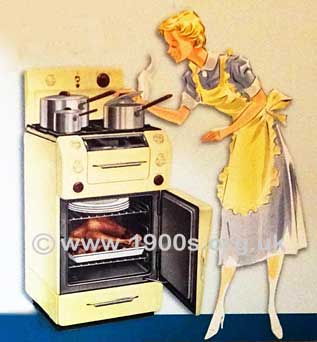 1950s advert, showing a woman with a nipped in waist and a frilly apron enthusiastically enjoying being in the kitchen


There is no shortage on the internet of other pictures of women from the 1950s showing them apparently enraptured with homecare and childcare.

The progaganda tactics were many, through magazines, radio programmes and posters, to name just three

Fashion played a major part in post-war propaganda. It was towards more feminine sex appeal. Skirts became flared with nipped in waists and bras were shaped to give an upturned and pointed shape to breasts. The fashion was called the 'New Look' and my mother remarked how stupid it was to use all that extra fabric in times of such austerity.

Was the achievement worth the cost?

The purpose at the beginning of the war was of course to fill the jobs of the men away in the military and the purpose at the end of the war was to free up the jobs for the returning men. In both purposes, the propaganda was certainly successful, and the extra fabric required for flaired clothes and frills was probably a small price to pay for giving the returning men back their jobs.

Some women, though, did object to their newly enforced role, because they were now used to bringing in money, being independent and having managerial responsibility. But objections seldom worked.

The real rise in women power came in the 1960s with the contraceptive pill.