From 1945 onwards, i.e. at the end of the Second World War, the UK government sold off vast quantities of war equipment at public auction presumably to make money and to satisfy the public hunger for goods that had been in short supply during the war. Everything from army clothing to aeroplanes. The easy availability of electronic parts intrigued many a young boy. Indeed my husband tells me that as a teenager he had frequently visited such stores and indeed bought an indicater unit, see below, which he converted into an oscilloscope.

I was particularly interested in radio and electronics, and shops like HL Smith, Henry's Radio and Laskey's sold these items. The Government Surplus shops for such items were in Lisle Street Soho and Praed Street off the Edgware Road - a long cycle ride for me, but worth it!

Advert for H L Smith, one of the many shops in the Edgware Road selling post-war electronic components, courtesy of Philip Stokes.

One of the most sort after things was the R1155 comm­unications receiver. If you had the money a brand new boxed receiver could be had for £7.19.6 a small fortune in those days. These were used by the amateur radio fraternity with slight modification. 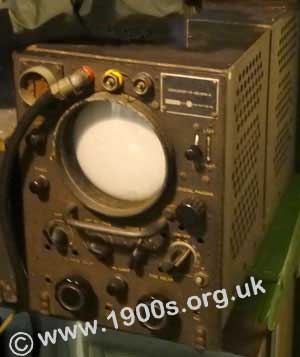 Indicator unit, surplus from World War Two, available widely and cheaply after the war. Many a boy adapted something like this as an oscilloscope.

The R1155 communication receiver was used mainly in RAF aircraft and some boats but never in tanks. Tanks mainly used the '19 set' which was also found piled to the ceiling in Lisle street shops !

One amplifier in particular was the 'Williamson' amplifier first published in 1947 by D.T.N Williamson. Its design became a standard for the 'Hi-Fi' DIY enthusiasts of the 1940s and 50s, and its concepts are still relevant as I write in 2014.

Magazines dedicated to radio and electronics

There were magazines which gave advice on making good use of the electronic parts available and advertised kits for making all sorts of devices.

The best magazine in my view was 'Wireless World' which no longer exists. Articles were contributed by very knowledgeable people such as scientists and engineers. I personally built numerous audio amplifiers with their help, firstly with valves and later with transistors.

'Practical Wireless' was another DIY constructors magazine. Another was 'Amateur Radio'. 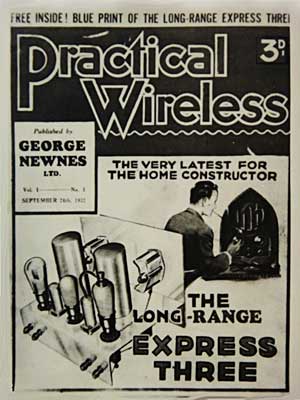 This copy of Practical Wireless is dated September 1932.

Photographed by the webmaster at a temporary exhibition. Note the old-style valves at the lower left.

All of these magazines carried adverts for kits for home construction. Shops like those in the Edgware also sold their own versions of such kits.

As a point of interest regarding Wireless World. Arthur C. Clarke the famous writer and scientist contributed an article in 1945 describing in some detail the current satellite system we are all using today. The edition was reprinted - I think around 2005 - as a commemorative gesture to his original thinking.

An item sold as a toy was a small parachute about three feet in diameter that we used to attach weights to and drop from the upper rooms of the house into the garden. I think originally they were used as a pilot parachute to enable the main canopy to be opened when deployed in action. If I remember they cost 1/6p from Steels in Burnt Oak Broadway.

Another item sold as a toy was a hand-held semaphore signalling device. It comprised of a black plastic/paper case about three inches square by a quarter of an inch thick, and when it was squeezed longitudinally a slatted window appeared depicting a series of alternate black and white bars. I can only think they were used for silent communicating between soldiers in action.

Also gas mask carriers were used by workers to carry their food and drinks when going to work by cycle.

The hardware shop in Edgware and presumably in other towns, sold army Jack Knives. They were displayed openly in a basket outside of the shop and cost 2/6d. They were a di-cast metal case with a separate blade and spike. Could you imagine this being allowed to happen today with the current health and safety industry?

The folding bicycles were made for the army. They consisted of an oval duplex steel frame hinged with a clamp in the middle of the frame for folding and ease of carrying. A TV series dealing with the D-day landings briefly showed a soldier arriving at the beach carrying one of the bicycles.

A second hand car yard lot called Brook's Motors on the Edgware Road facing Garrett Road bought a pile of these bicycles, re-sprayed them and sold them on. They were very popular because regular new bicycles were like 'gold dust' after the war.