VE Day: Celebrations on the home front of WW2 victory in Europe

The day that victory was announced was not total victory. It was victory in Europe and accordingly known by those initials as VE Day. It meant that Britain was safe from German aggression, and as far as the whole of Europe was concerned, it was real victory.

The Daily Mail announces Victory in Europe. Tap/click for a larger image to read the headlines.

The Royal family join the celebrations with the crowd from Buckingham Palace balcony. 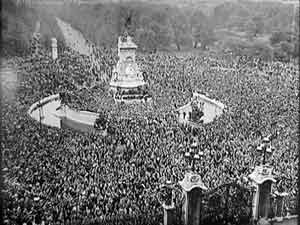 Peace celebrations in the Mall outside Buckingham Palace. 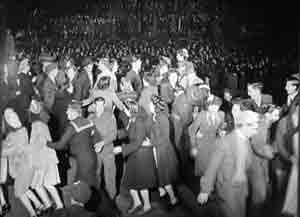 Peace celebrations: dancing in the streets.

I went to Buckingham Palace with my uncle, Jack Sharpe, to see the crowds of peoples dancing and singing in the streets, thanking God that our prayers had at last been answered.

We walked across the park to Wellington Barracks to see the Guards Chapel, out of respect for our Uncle Alan who was killed in action in Italy. The chapel had been hit by a V2 rocket on a Sunday morning when it was full of people. Now it was just a pile of rubble.

We had lived in hope and fear, although not a religious family, when the bombs and doodlebugs were falling we held each other and said a silent prayer. Now it was all over, life was going it get better. We did not know at that time that Food Rationing would go on for another eight years or more.

The lights come back on!

I was eight when the war ended and have a clear memory of our celebratory evening street bonfire. The light was bright, for the first time since the beginning of the war and the fire was so hot that the concrete road cracked with a huge noise!


In the evening we went to a dinner and dance in the ballroom above the Regal Cinema. All the street lights that were still working came on, and to walk home and see the lights on in every house blazing out, it was magic after those long years of war. Some of the shops had their windows ablaze with light.

There was also a bonfire. Life was going to get better from now on.

We arrived at Southend later that day.
For once, people's faces were bright and gay.
Merriment showed and laughter abounded.
Out in the Thames victory sirens sounded.

Street lights came on for the first time in years.
As the need for blackout disappears.
That night we strolled along the prom.
The whole town turned out, a happy throng.

They danced in the streets to a lively band.
Some linking arms, others hand in hand.
Soldiers, sailors and airmen all joined in.
On everyone's face was a merry grin.

extracted with permission from
an unpublished poem by Mike Swift

Yet some of the houses had their curtains drawn with the residents shut inside. When these people did come out to watch, they would be crying. We were told that these families had lost the man of the house or one of the adult children while serving in the forces.

Britain celebrated victory in World War Two with numerous events all over the country. All were tagged as VE Day events although they took time to organise and took place sometime after VE Day itself. VE Day was the day of Victory in Europe on 8 May 1945. VJ Day, the day victory was declared over Japan, took place two months later on 15 August 1945 and marked the end of all hostilities.

The celebrations were wide-ranging, limited only by imagination and money. Some took time to set up but many were spontaneous.

There were military parades. Ours in Edmonton took place in Fore Street, starting at Noel Park and it was saluted by the Mayor outside the Town Hall. My uncle who was in the Home Guard was involved. I remember climbing into a Bren Gun Carrier, a small tank, with lots of other children outside the town hall and speeding to the Angel pub and back. 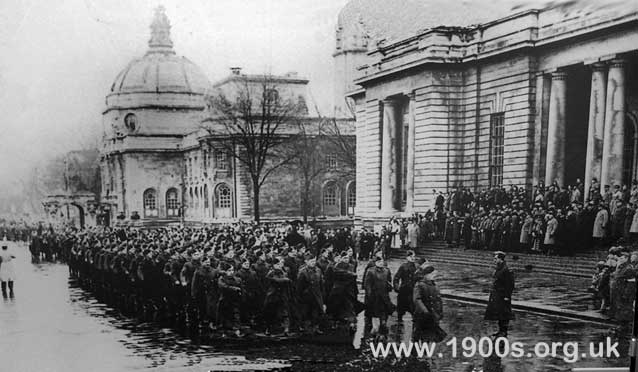 We also had street parties. People put their tables and chairs out into the street. In our street these spanned nearly half the length of the street. A stage was erected in the middle of the street and there was music, light, and people singing, glad to be alive.

The following images of street parties in Edmonton (now Enfield) enlarge on tap/click so that you may be able to recognise someone. 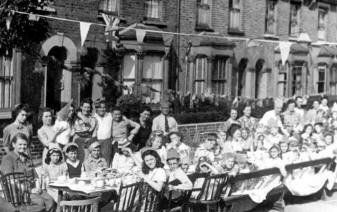 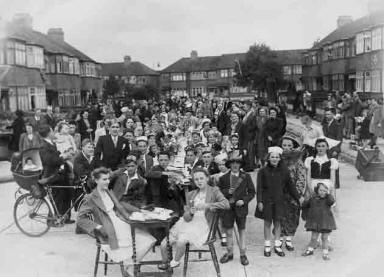 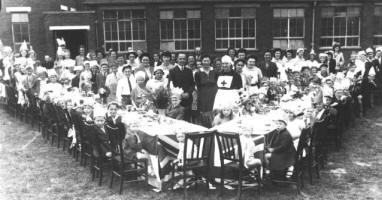 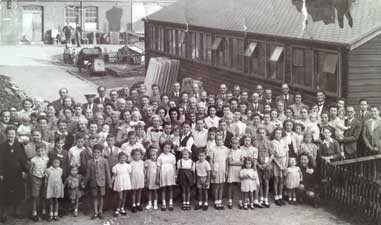 Brook Avenue where I lived in Edgware had its own street party. It was held in the garden of the flats at the start of the road.

We children had to dress up but there was precious little to dress up with. Most of us just wore home-made hats. I am third from the left in the front row of the picture and my mother made my hat by covering a custard tin. The brim was made of cardboard.

The following images enlarge on tap/click so that you may be able to recognise someone.

The women who organised the Street Peace Party******


VJ Day: Victory in Japan and all hostilities cease

VJ Day marked Victory in Japan on 15 August 1945, the end of all hostilities. It followed the dropping of the first atom bombs, after which the world would never be the same again, but that is outside the scope of this website.

Relieved of the anguish of six years of war.
Two final blows put Japan on the floor.

Celebrations now over, though quite an affair.
There's work to be done, change is in the air.

extracted with permission from
an unpublished poem by Mike Swift

More about the photos

*Photo courtesy of David Smythe. It is a perfect companion for the one on this website for the World War One Lopen Road Peace Party. The houses appear to have changed little from my mother's time - see 116 Lopen Road in 1911. My cousing Anne Cole is sitting just below the first of the second group of adults. Others somewhere in the photo are Sylvia Bately, Brian Bately, Beryl Sawyer and Jimmy and Betty Bilson.

**Photo courtesy of Tom Wallace. His sister, Eileen Wallace, is the girl on the left at the front table, sitting with her best friend, Frances. They had a separate table because Frances had chicken pox. He is the boy in the top hat and socks down to his ankles. He was dressed as a conjurer and won a prize for it in the competition.

***Photo courtesy of Andrew Dickson. Haselbury Road later changed its name to Amersham Avenue. The adjacent three roads were Harding Road, Tiverton Road and Giffard Road, Edmonton. The two adults in the centre, in the dark clothes, are Mr and Mrs Carr, with Mrs Dickson behind her. Mrs Flowers of 2 Haselbury Road is on the right in the doorway. Andrew is sitting along the front with Ronald Flowers and Leslie Carr.

****Photo courtesy of Vera Harding, born Vera Eaton. The party was held at the Town Hall in Lower Edmonton and the photo was taken round the back of the Town Hall.

*****Names, where I remember, are as they sounded to me at the time. Left to right:

In the background is the shed for housing the trains of Edgware Tube station which was a terminus.

******The women who organised the Street Peace Party for Brook Avenue, Edgware, Middlesex at the end of the Second World War in 1945. I remember very few of their names. Back row 2nd from right: Mrs Newing and on her right Mrs English (who was Scottish). Far left: Mrs Potter. Front row: Mr and Mrs Less.

Note the absence of young men. The only man in the photo would have been too old or ill to be drafted into the forces, but would have done his fair share of fire watching.