Tanks on the streets and fighter planes in the sky

During the first part of the Second World War, I was too young to go to school, so spent a lot of time trailing round all the small shops with my mother was shopping. There were signs of war all around, although of course to me who knew nothing else, they were simply normal. Quite apart from bomb damage, I often saw tanks rumbling down the street and fighter planes in the sky.

Tanks in the streets

Sometimes, too, a fleet of tanks would roll through the High Street (Station Road). I thought little of it because I was too young to know anything else. 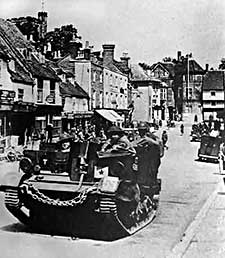 A tank in an English street during World War Two. Photo in the effects of Ena Cole. As a child I saw what looked to me like fleets tanks ploughing along the main road in the Edgware shopping centre.

At the age of 3, I remember peering through the bars of our front gate at 79 Vancouver Road, Edgware, and seeing a tank or other military vehicle parked outside our house.

I saw a light underneath and fully recollect lying down on the path and looking underneath the vehicle. There was a trapdoor with a light coming out: I saw a soldier's boot and heard voices from inside and the chatter of a radio.

The vehicle in the photo is not a tank, but a Universal Carrier, often called a Bren Gun Carrier - one of a family of light armoured tracked vehicles used for transporting personnel and equipment. With some 113,000 built by 1960 in the United Kingdom and abroad, it is the most produced armoured fighting vehicle in history.

Fighter planes in the sky

Sometimes while waiting as my mother was caught by another shopper, small planes would fly overhead, always low-flying, and I would check the marks on their wings to confirm that they were 'ours' with the familiar red white and blue circles on the wings.

Planes flying overhead during WW2 - as they appeared to me as a child in Edgware, looking upwards. This picture is a computerised composite of several original photographs, created to match my recollections, and may not represent the actual aircraft types.

Of course they always were ours. If German Nazi bombers had been anywhere near, there would have been the wail of the air raid siren to warn us.