Before the late 1950s and 1950s, tasks which were later automated were done by people employed to do the jobs. Self-service was largely unheard of. This page gives recollection of customer service in two areas where it no longer happens today.

For example, no-one other than the 'lift boy' ever worked the lifts in hotels and large shops. 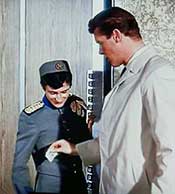 Lift boy accepting a tip - not that it was usual to tip lift boys. Screen shot from an old film.

Lift boys always wore smart uniform with matching pill-box caps, and they worked the lifts and opened and closed the gates. What a boring job it must have been doing this for hours at a time, never seeing daylight!

Neither did anyone ever serve themselves for petrol, as there was always an attendant who filled the tank, took the money and brought back the change.

He - and it always seemed to be a he - normally wore overalls, and he didn't just stand around waiting for customers. He sat in his office doing office work and kept an eye open through the window for customers. There was so little traffic on the roads, that he must have been able to get quite a lot of office work done without ever keeping customers waiting.

(In World War Two of course, when women did men's jobs, there were no private cars on the roads and I was too young to know whether it was men or women who filled the war-work vehicles.)