Recollections of policemen in Britain during World War Two

Young and fit policemen were mobilised into the armed forces during the Second World War (1939-1945), leaving the older policemen to serve on the home front. 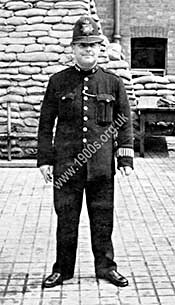 Policeman in the Met force in WW2. Photo courtesy of Jim Stracey.

These older policemen were supported by men who were too old to fight and younger men in reserved occupations who were drafted in to serve as special constables - just like my grandfather in the First World War.

During the Second World War the police worked closely with the ARP, Home Guard and firemen - but I have found that recollections of personal experiences are hard to come by.

When I visited my granddad's bombed house in World War Two, the policeman on duty had on a tin helmet painted black and a army issue gas mask in a small pack slung across his back. 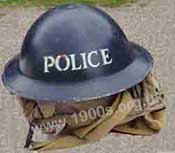 Many of the policemen during the war did not retire at the normal of about 45 years but continued in service well into their sixties. During this period the helmet badge and jacket buttons were coated black to stop reflection. They have since reverted to silver.

There were special constables, these being fit men of working age in reserved occupations. They carried a cape in bad weather. Some of these were made of thick cloth and some were a rubberized waterproof material.

I think that Peter Johnson was speaking of policemen's night-time uniform when air-raids were expected, whereas the photo at the top of the page is of daytime wear.

My recollections of policemen's uniform in wartime Britain is rather different from Peter Johnson's. My father was a police constable at the Met Police station in Fore St, Edmonton throughout the war, and his helmet was as shown in the picture which was taken in 1941 in the back yard of the Fore Street station. It was dark blue with 'Police' in white - never black. Neither were the silver buttons on the tunic painted black to stop reflection as the photo of my father shows. As you can see his buttons are bright and shiny.

Note the sand bags against bomb blast in that photo.